Have you ever wondered what happened to Frosty the Snowman after the movie ended? Well, now you can finally have that lifelong mystery answered with the new Arrow Video Blu-ray release of the “cult classic” Microwave Massacre! If you are confused as shit, read on!

THEY CAME FOR DINNER…TO FIND THEY WERE IT!! Microwave Massacre stars legendary stand-up comedian and actor Jackie Vernon as Donald, a disgruntled construction worker whose wife’s predilection for haute cuisine drives him to cannibalism. Donald unwittingly stumbles upon a solution to his two major problems in his life – his nagging wife and his lack of tasty meals – when, one night, he bludgeons his better half to death with a pepper grinder in a drunken rage. Thinking on his feet, Donald dismembers the body and sets about microwaving the remains, which turn out to be rather delicious. Trouble is, now he’s got a taste for human flesh that needs satisfying… Eschewing all notions of good taste, Wayne Berwick’s Microwave Massacre is a deliciously depraved exercise in political incorrectness that has gone on to gain a cult following thanks to a characteristically deadpan performance from lead Vernon, who delivers such choice lines as “I’m so hungry I could eat a whore”. Vegetarians need not apply! 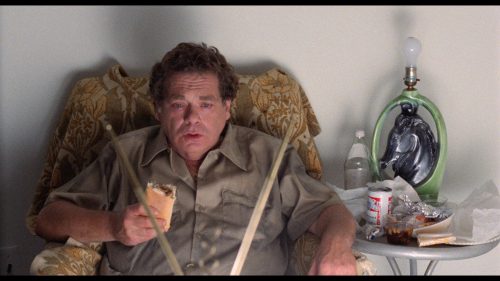 Frosty has now apparently transformed from a snowman into a middle-aged man in a dead-end relationship. He wakes up everyday and heads to his construction job where everyone stands around with hard hats on and holding shovels (hey, just like real government work!) His miserable day tops off when he opens up his lunch and sees yet another “gourmet” meal from his equally miserable wife. However, maybe things will change now that his wife has bought a fancy new microwave.

Things to do change, but not in the way he was hoping. Meals are still just as weird and foreign as can be, and he is at his breaking point. Frosty decides to end it all and kill his wife with a salt grinder. His wife ends up in the new fancy microwave and is set to slow-roasted, but you cannot leave evidence around like that, can you? No, no you cannot. Frosty decides through a simple mistake of confusing actual meat with a fried hand, to become a cannibal. He is going to eat the rest of the evidence and share with his friends at work, who also love the taste. The perfect plan!

The meats tough, though, so he realises he needs to go for some younger, fresher meat. Frosty puts on the charm we all love and hooks up with several working-class ladies of the evening and makes dinner plans with them. If you ever wanted to know what Frosty would sound like having sex, this movie is for you!

The script was originally meant to be more of a horror film, but the result was a slapstick, comedy fest of gags and jokes that missed the mark by a mile. Yet, why was I smiling throughout the 76-minute runtime? I mean, I know the movie is awful, yet I could not help enjoy it. Is there something wrong with me? Maybe it is the charm of the film that won me over or maybe it is the generous helping of boobies. Yeah, definitely the boobies.

Raise your hand if you like downright bad horror movies. If you are reaching for the sky like I am, you can rest easy in knowing you will get a kick out of this trashy, low budget schlock.

Now that you know what Microwave Massacre is all about, you are probably wondering whether the Blu-ray is worth it. Well, Arrow Video is not normally a company to slouch on their releases, even if the movie is Microwave Massacre. Once again, they come through with a solid presentation of cleaned up video and audio that only had a few areas of noticeable distortion. The distortion will not distract from this jaw-dropping experience one bit.

As for the special features, the film is rocking a 21-minute interview with director Wayne Berwick, producer Craig Muckler and actor Loren Schein. They reminisce about the history of the movie and how they came together as a family to make a flick that didn’t end up being anything like they imagined it would be. Also included is a trailer, gallery and audio commentary with producer Craig Muckler.

In regards to the commentary, the Blu-ray menus list the commentary as being with director Wayne Berwick, but that is, in fact, false. The correct commentary on the back cover of the Blu is with Muckler and moderated by Mike Tristano. Would a commentary with the director be cool? Sure, but the one we get with Muckler is filled with plenty of info to keep you filled up.

You cannot easily rate Microwave Massacre on a one to ten scale. I mean, come on, it is terrible. However, like most bad horror movies that have a hidden charm, it is fun to watch. Adding to the fun is a damn solid Blu-ray from Arrow Video. I will leave the decision as to whether you should buy up to you, but if you ask me, I think it is worth picking up just for the experience of seeing Frosty boink a hooker. Childhood ruined!

Blackenstein – Review (Severin Films Blu-ray)
wpDiscuz
We use cookies to ensure that we give you the best experience on our website. If you continue to use this site we will assume that you are happy with it.Ok