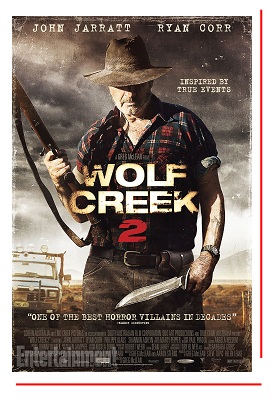 Mick is back baby and boy is he in a pissed off mood. The first Wolf Creek might not have offered us anything we hadn’t already seen before ,thanks to the countless torture films before it, but it did give us an amazing and brutal character in the way of Mick Taylor, played brilliantly by John Jarratt. Wolf Creek 2 offers up pretty much the same thing as before, but Jarratt manages to steal the show again, with an amazing performance, that will leave you breathless, disgusted and scared beyond your wits. As for the rest of the movie? Let’s read on and see…


Short nitty-gritty plot description from IMDb is as follows: The outback once more becomes a place of horror as another unwitting tourist becomes the prey for crazed, serial-killing pig-hunter Mick Taylor.

Tatlock’s Quick ‘n Dirty Recap: Wolf Creek 2 starts off with a gory bang, as Mick is pulled over by some corrupt asshole cops, who quickly learn you shouldn’t mess with the Mick. After that awesome opening, we get into the meat of the story, where we follow two German backpackers who are exploring the Australian Outback, specifically Wolf Creek. After one thing leads to another, we get introduced to the actual main character, by the name of Paul (Ryan Corr), who gets roped up in the deadly shenanigans of Mick and must fight for his life.

Tatlock’s Opinion: Wolf Creek 2 is in no way a bad movie, in fact, it’s pretty damn entertaining and gloriously gory movie. Jarratt steals the scene every time he pops up and I can’t imagine anyone else playing the deadly and psychotic Mick Taylor. Sadly, Wolf Creek 2 also doesn’t offer anything really new that we didn’t see in the previous movie. In fact, it pretty much traces the same steps Wolf Creek took, which is a damn shame. There is one other thing that really annoys me about the movie and that’s the ending, but in order to say what it is, it would involve spoiling it, so maybe if someone comes along to this review and wants to discuss it more in the comments, I’ll be willing to spoil it down under (ha, get it? Down under, Australia, comments. God, I sometimes kill myself).

Tatlock’s Verdict: Wolf Creek 2 has got the gore, the villain and some tense scenes down pat, but, unfortunately it also rehashes most of the first one and barely offers up anything new we haven’t already seen. However, that is by no means an excuse for avoiding the movie. In fact, I highly recommend checking it out if you loved the first one and especially if you love the deadly Mick Taylor.

Firestarter Movie Review
wpDiscuz
0
0
Would love your thoughts, please comment.x
()
x
| Reply
We use cookies to ensure that we give you the best experience on our website. If you continue to use this site we will assume that you are happy with it.Ok