The Seduction squanders its potential, but still offers enough sensuality in the form of Morgan Fairchild to make it a recommend. Scream Factory offers a solid Blu-ray release with some new interviews to check out.
Movie
Blu-ray
4

Stalker films may be a dime a dozen nowadays, but back in 1982, you didn’t have as much to choose from. You had ones like John Carpenter’s Someone’s Watching Me and the Clint Eastwood movie Play Misty for Me, but what was missing from those movies? Dare I say Morgan Fairchild naked, and on occasion brandishing a shotgun? Yes, I do dare!

The Seduction starts things off with a nice ’80s gleam, with pink font and sexy early ’80s music. From there we are introduced to a naked Jamie (Morgan Fairchild) swimming in her pool, soliloquizing about her happy life. Unbeknownst to Jamie, she has an admirer named Derek (Andrew Stevens in the third movie I’ve seen him in lately, with the other two being 10 to Midnight and Scared Stiff). Derek doesn’t hide in the shadows like normal stalkers, he lives quite close and peeps on her with his high-powered telescope. He even confronts her at her place of business, a news station. Jamie lets her feelings be known that she doesn’t like him very much. She isn’t too worried about the situation as her boyfriend is around to protect her. Thank goodness, as the local police captain ranks as the worst cop in all of movie history and demands he be told what to do. He says there isn’t anything he can do. He is just too distraught over not catching all the rapists and murderers out there (I know, random, but they are his words not mine). As tensions build and Derek’s emotions go into overdrive, he pushes boundaries too far and Jamie will need to take matters into her own hands. Oh, and Colleen Jones is in the movie, but her character is pointless and wasted. 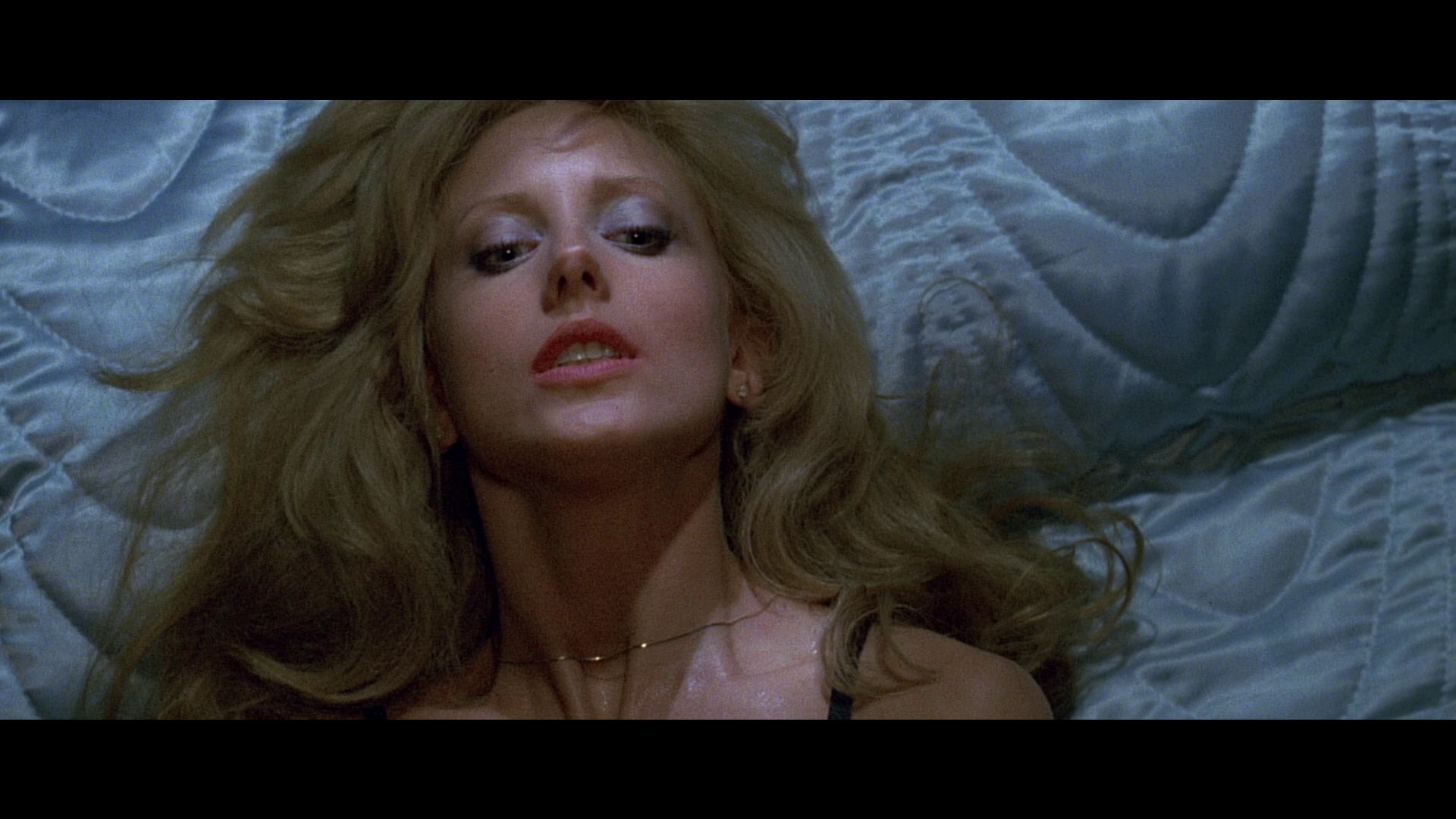 The Seduction uses the sensuality of Morgan Fairchild to sell the movie and boy, I think they did a great job in that regard. Unfortunately, the story by David Schmoeller is a rather dull affair with not enough blood and gristle to sell this stalker plot. Steven’s character Derek doesn’t go balls to the wall crazy, even though there are times when you think he might dispatch a person or two. As already mentioned, characters are wasted and chances are squandered to make it a hit thriller. Also, the ending drags on and on. A healthy dose of trimming to the final scenes to tighten up the pace would have helped things greatly as Fairchild does a splendid job when she takes matters into her own hands, even if some of her reactions to the events surrounding her are bizarre.

If the sensual looks of Morgan Fairchild are the main reason to see The Seduction, then you’ll want the picture quality to be top shelf. Thankfully Scream Factory delivers an amazing job in regards to both the picture and the audio experience. There isn’t much information to be found about the transfer, but from watching the film and perusing our Still Gallery on Cultsploitation, you can see the results are great.

Extra features are a bit of the new and old. We have three new interviews to check out. The first is a 22-minute interview with Morgan Fairchild who discusses getting into the acting business and her work on The Seduction. It is interesting that she notes she had no problem with doing the nudity as long as she had the final say on the promotional material used. Next, we have an 11-minute interview with Andrew Stevens, who point blank tells you that he kept saying no to the project, mainly because of his disappointment with the script and ending. Let’s just say he felt it was a bit, umm, flaccid. The third and final interview is with producer Bruce Cohn Curtis, who discusses working with Irwin Yablans and getting the film up and off the ground. Rounding it all out are three older featurettes, an older commentary with Producer Irwin Yablans, Bruce Cohn Curtis, and Writer/Director David Schmoeller, a trailer, TV spot, and finally a still gallery. 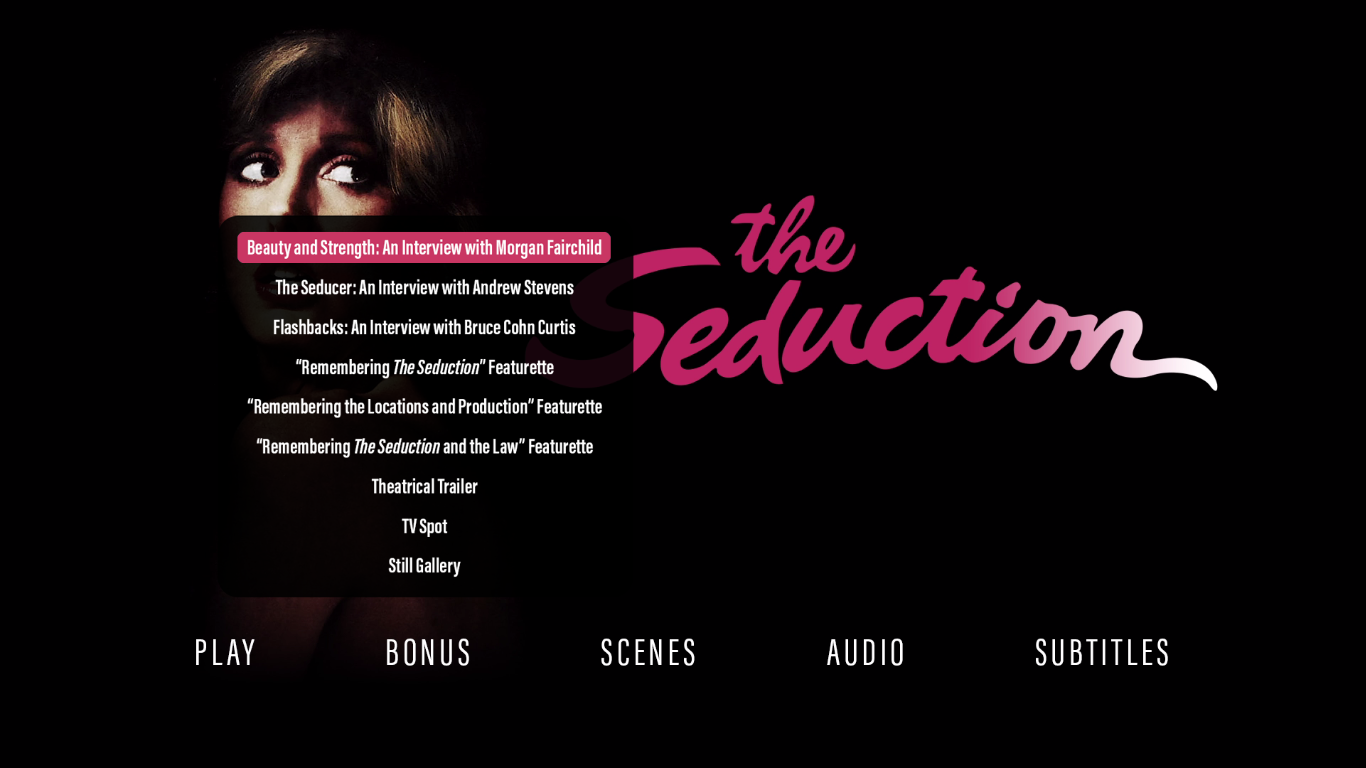 The Seduction has the formula to be a balls-to-the-wall stalker film from the ’80s. It has the strikingly gorgeous lead in Morgan Fairchild, a competent and good-looking actor playing the stalker, and Colleen Jones looking sexy as always. It, unfortunately, doesn’t go all the way and plays it way too safe. Top it off with an ending that drags, and you have one film that is having a hard time seducing you. Fortunately, Scream Factory has found a way of seducing the fans by providing solid video and audio. They also provide some fun new features, and were kind enough to throw on some old ones just in case you missed them on past releases.

Howling II (Blu-ray / Movie Review)
wpDiscuz
0
0
Would love your thoughts, please comment.x
()
x
| Reply
We use cookies to ensure that we give you the best experience on our website. If you continue to use this site we will assume that you are happy with it.Ok