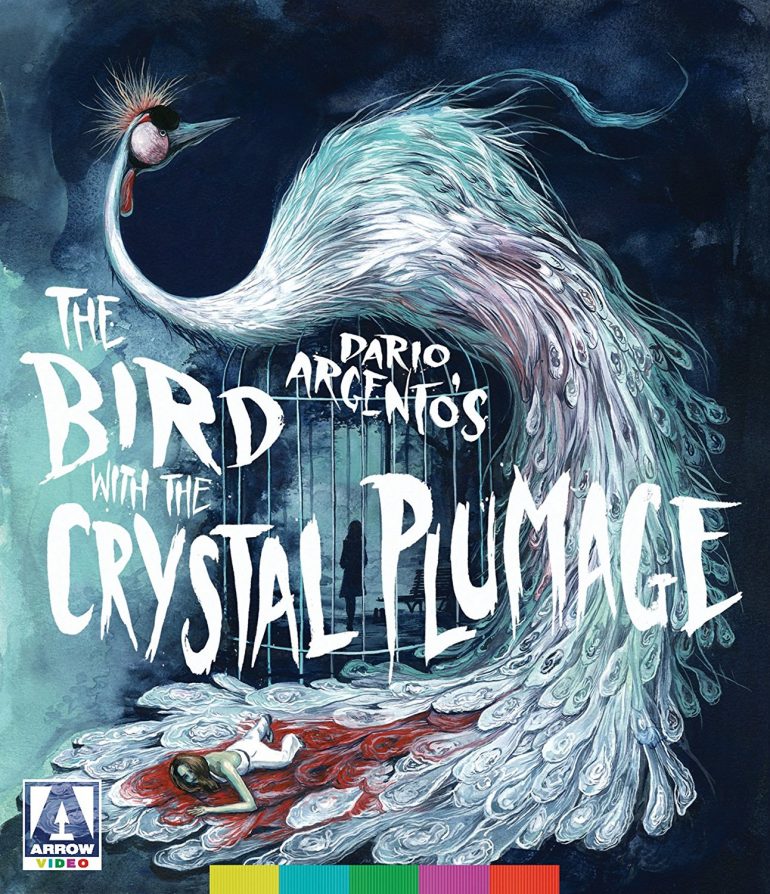 I feel awful saying this, but this was my first time watching The Bird with the Crystal Plumage. I have seen most of Dario Argento’s films, but oddly enough, I never got around to watching his directorial debut. Why? I have no sweet clue, but you know what? I’m glad that I waited as I was able to finally watch the film for the first time on a fantastic Blu-ray release from Arrow Video. As for the film itself, hot damn was it ever good!

In 1970, young first-time director Dario Argento (Deep Red, Suspiria) made his indelible mark on Italian cinema with The Bird with the Crystal Plumage a film which redefined the ‘giallo’ genre of murder-mystery thrillers and catapulted him to international stardom.

Sam Dalmas (Tony Musante, We Own the Night), an American writer living in Rome, inadvertently witnesses a brutal attack on a woman (Eva Renzi, Funeral in Berlin) in a modern art gallery. Powerless to help, he grows increasingly obsessed with the incident. Convinced that something he saw that night holds the key to identifying the maniac terrorizing Rome, he launches his own investigation parallel to that of the police, heedless of the danger to both himself and his girlfriend Giulia (Suzy Kendall, Spasmo)…

A staggeringly assured debut, The Bird with the Crystal Plumage establishes the key traits that would define Argento’s filmography, including lavish visuals and a flare for wildly inventive, brutal scenes of violence. With sumptuous cinematography by Vittorio Storaro (Apocalypse Now) and a seductive score by legendary composer Ennio Morricone (Once Upon a Time in the West), this landmark film has never looked or sounded better in this new, 4K-restored limited edition from Arrow Video!

As previously mentioned, this is Argento’s first foray into directing, and I have to hand it to the guy, he sure knows how to deliver a freaking solid Giallo. The film will have you guessing all the way to the end, as you ride along with Sam Dalmas (Tony Musante), who has witnessed a murder attempt at the beginning of the film. He eventually gets roped up in trying to figure how who the killer is, as the murderer has already struck three times previously, and he may just be next on the killer hit list.

The film has all the usual trappings (not a negative) of a Giallo, with the blacked gloved killer hunting down helpless damsels in distress, with the main character, a guy, of course, being the only one who can save the day. The main guy usually has to have a girlfriend or wife who is dumb as bricks and is only present to be saved. This time around, the wife is played by Suzy Kendall, whom you may know from the films Torso or Tales that Witness Madness.

As the film is a product of its time, you do have to suffer through a few scenes that are groan inducing. The biggest being a stalking scene involving Kendall, who comes across like a trapped animal in a corner, a corner that is full of weapons to defend yourself and a big barred door to keep the killer out. Why is she screaming her head off and crawling around on the floor? Oh, because she is a blonde hottie, meant to be saved.

Nevertheless, The Bird with the Crystal Plumage cultivates a killer story that has you glued to the screen, looking for clues to who is committing the murders. No spoilers from me! If you’re a fan of films like Blood and Black Lace from Mario Bava, The Bird with the Crystal Plumage is going to be right up your alley. It may feel a bit different from Argento’s later efforts, with Ennio Morricone providing the soundtrack instead of Argento’s go to band Goblin, and the film lacks gore, but even with these differences, this is still one of Argento’s finest films.

Arrow Video continues to outshine their competition with this superb Limited Edition release of The Bird with the Crystal Plumage. Packed in a cardboard case, you receive the movie on Blu-ray and DVD, a poster of the newly commissioned artwork (alternate poster on the back side), some nice lobby cards, and an excellent lengthy booklet featuring a bunch of essays and information on the film.

The Hound of the Baskervilles – Twilight Time Blu-ray Review

Things are already looking great before you even pop in the movie on Blu-ray. Once you do, you are treated to a stupendously upgraded viewing experience. The Bird with the Crystal Plumage has never looked this good (as this is my first time seeing the film, I can only say this because of caps-a-holic’s wonderful comparison page). The colours are darker and more natural than previous Blu-ray releases. A lot of debris and scratches have been cleaned up, and the overall all viewing experience is highly enjoyable. As for the audio experience, the film provides you with both an English and Italian (English SDH subtitled) Lossless soundtrack. The film was dubbed post-production, so there are synching issues, which is common. I found the English track a bit louder in regards to dialogue, but either option is an absolutely acceptable listening experience.

After you’ve watched the movie, you can expect to dive into a healthy supply of special features. You have a bunch of interviews, which all are rather lengthy but never boring. The newly shot interview with Dario Argento is a big bonus. Also provided is an audio commentary with Troy Howarth, author of So Deadly, So Perverse: 50 Years of Italian Giallo Films. Rounding out the features are some trailers. Special feature fans will be pleased with this release, but I do have to wonder why there is no new audio commentary with Dario Argento.

The Bird with the Crystal Plumage is where it all started for Dario Argento, and unlike some directors, his first film is fantastic. His talent for the deadly mystery is very much evident in this early work of his, and the film provides us with a story that is worth watching over and over. What better way than with Arrow Video’s sublime Limited Edition Blu-ray release.

Blood and Black Lace (Arrow Video Blu-ray / Movie Review)
wpDiscuz
We use cookies to ensure that we give you the best experience on our website. If you continue to use this site we will assume that you are happy with it.Ok