In your film circlejerks, have you ever heard the following wishes from cinephiles?

If any of those things cropped up in your discussions, then man is Savage Harbor for you. This 1987 “gritty” “crime” drama from Carl Monson is truly bottom-of-the-barrel action from the ’80s – and its Christmas setting ain’t gonna give Die Hard or Lethal Weapon a run for their money. Filmed for a measly budget and attempting to capitalize on the last names of its stars – yes, promo artwork did prominently display STALLONE and MITCHUM despite, you know, offering the lite version – Savage Harbor tells the – ahem, romantic – tale of a longshoresman (Stallone) who falls in love with Anne (Karen Mayo-Chandler), who is escaping the nefarious clutches of her heroin addiction and the drug dealer/pimp who has been supplying it (Anthony Caruso).

Savage Harbor‘s writing is dreadfully atrocious, almost as bad as most of its actors. However, it has a surrealistic, borderline nonsensical element that molds the film into a particularly enjoyable bad movie. It has the perfect combination of awfulness and good intentions that make it stand out from other schlock that’s just plain bad. Take the whole element of Anne falling in love with Stallone’s character Joe after their first meeting; he saves her from a leering rapist, and immediately they’re down by the beach canoodling like any blossoming romance. Or how about the secondary story about Joe’s friend Bill (Mitchum), who’s looking for any old woman to bed (“a broad’s a broad to me,” he says philosophically) before impractically falling in love with a Santa-nippled stripper (Lisa Loring – yes, that Lisa of The Addams Family fame).

The entirety of Savage Harbor is based on revenge as Joe seeks out Caruso’s mob boss Harry when he kidnaps Anne and gets her back into prostitution. What amounts is a number of insanely bad shootouts – sometimes Joe can’t hit shit, sometimes he can take out an entire apartment building – and an incredibly unsuspenseful car chase sequence where both cars drive somewhat unsafely through a dock obstacle course. Of course Joe finally gets the girl, and they both agree: they like avocados, so naturally they’ll settle down on an avocado farm.

Savage Harbor is perplexing, often terrible, and overwhelmingly cheesy. And it’s probably some of the most fun you’ll have watching a dreadful film, from the bad dialogue to the perpetual Christmas that takes place throughout the film cropping up every 6 months. Definitely recommended for drunken Christmas parties, to be paired with clips from Norm Macdonald’s Weekend Update and his long-running Frank Stallone gag.

Vinegar Syndrome understands the value of this ferociously bad film and they’ve suitably brought it back from the dead with a new 2k scan of the original camera negative. It has been reported that some of the VHS releases of the film had some footage cut for some reason, but this release does restore Savage Harbor to its 90 minute runtime. The 1.85:1 scan looks quite good despite a couple of lines and debris; the overall picture quality is crisp and detailed, though it does reveal a number of out-of-focus shots in the film itself. A few areas of damage do not detract from the great transfer and color timing, and Vinegar Syndrome has done a very good job with this rather undeserving movie.

Audio is presented in a DTS-HD MA 2.0 track and it sounds good with nice separation, consistent dialogue volume, and good soundtrack vibrance. English subtitles are also included but there are a few issues. There are a couple of incorrect transcriptions, and a more serious issue occurs around 20 minutes in with the subtitles losing sync during one particular scene. They sync back up after a couple of minutes.

Extras include a new interview with Frank Stallone that lasts about 15 minutes; he relates a lot of info about working on the film, gives behind-the-scenes info about working at a particularly dive-y bar, and says the movie is “bad” about five times. Also included is an audio interview with cinematographer Jack Beckett which lasts about 30 minutes; he gives info about his career as well as some fun storytelling on the film, and he does mention the missing footage that has been restored in this release.

This release also has reversible cover artwork, the double-sided bottom-loading slipcover, and a large double-sided poster as well.

Savage Harbor is awful, which is what makes it so worth a watch. Add some nice extra features and a great transfer onto this Blu-ray and you’ve got yourself a piece of schlock that definitely needs to be experienced. 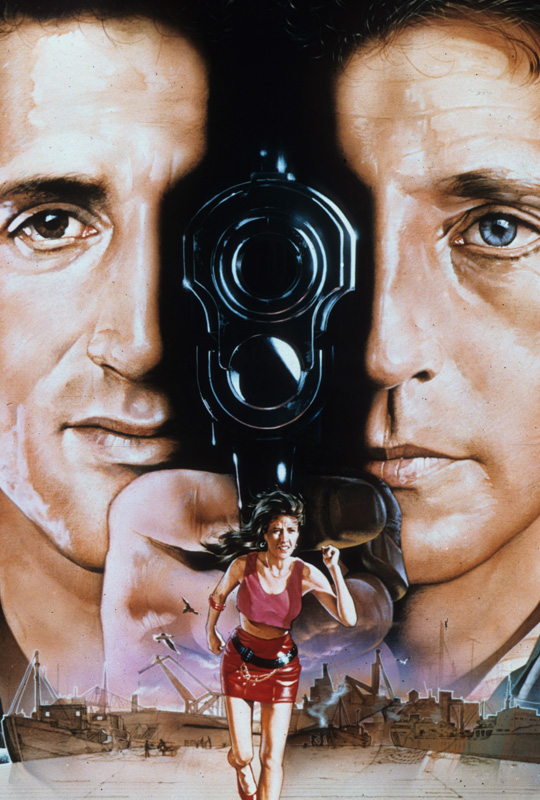 CHECK OUT
A gallery of screenshots from Savage Harbor.