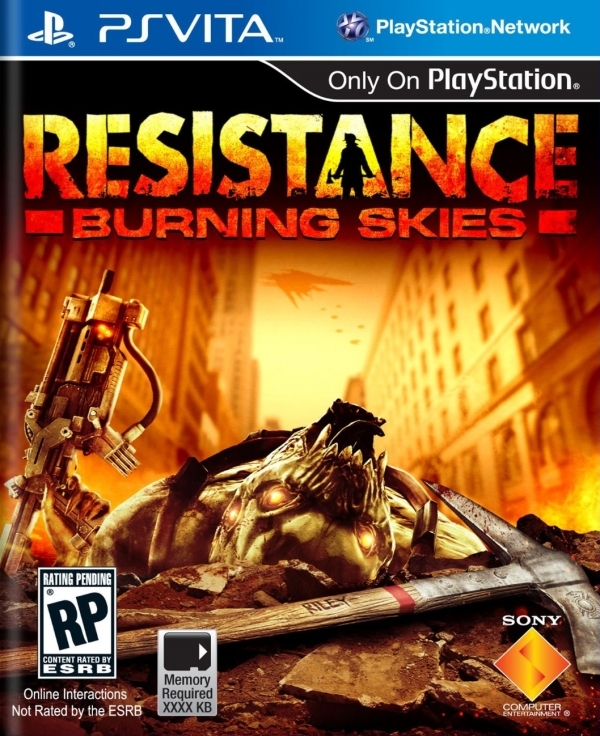 Resistance: Burning Skies, the fourth installment in the Resistance series, comes to us in handheld form.  Appearing on the Vita, a system which is touted as offering a console like experience, Burning Skies manages to impress in some areas and sadly disappoint in others.  Read on to find out why.

Short nitty-gritty plot description from the Official Website is as follows: August 1951: the attack on North America’s east coast begins… As New Jersey fire fighter and National Guardsman Tom Riley, you’re about to come face to face with the brutal Chimeran invasion force in this blistering shooter built from the ground up for PlayStation®Vita System.

I see a lot of reviews that are putting Resistance: Burning Skies up against it’s console counterparts and lowering the score.  I feel this is unfair and it shouldn’t be the main focus when reviewing this game.  I know some say that if Sony is going to claim “console-like experience,” then you should judge it against console games. I think some people need to sit back and think about what “console-like experience” actually means, maybe if Sony said “console-exact experience” I can see the reasoning behind it. I’m personally going to judge the game on what it brings to the “handheld experience.”

Resistance: Burning Skies is a first person shooter on the Vita (the first of its kind) and has a 6 hour campaign consisting of 6 levels and some online multiplayer.  The single player story of Tom Riley, firefighter turned Alien Ass Kicker, is thin and on the short side. It’s very basic, Tom is out to rescue his wife and kid and the story doesn’t really deviate from that path. You’ll meet up with some resistance fighters and a love triangle is hinted at, but never comes to fruition. The ending is a let down, which consist of a couple short cut scenes.  The story of Tom Riley didn’t go where I wanted it to and seeing how it takes place between the first and second game, the ending could of tried to do a lead in or nod to the other games, but sadly decided not to. 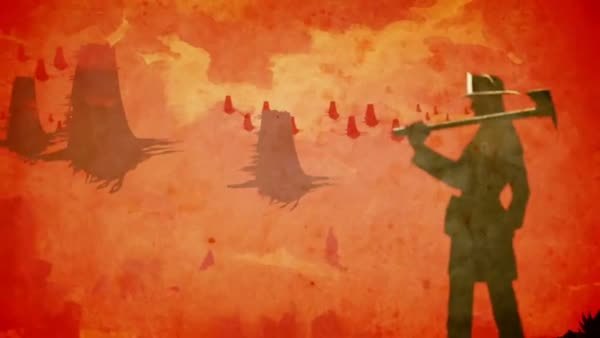 Thankfully the game play is where the fun is at. The levels can vary from fighting aliens on the George Washington Bridge to being inside a giant alien tower, knee deep in alien/human goo and the excitement doesn’t stop. Occasionally, you’ll notice that sometimes the levels can be small, confined, easy and none of the enemies will every cause any sort of threat.

The weapons can range from the standard M1 Carbine, all the way to the alien Auger (a weapon which can see and shoot through walls). A complaint I have is the lack of bullets for the guns. You’ll see a lot of ammo crates, but for some reason I never had enough (maybe my aim sucked). The game has a total of X guns and each one has its own secondary fire, which is activated by touching the screen. It can get cumbersome when you’re trying to activate your secondary fire with your left hand and move the camera and fire with your right. Fortunately, the game chooses not to overwhelm you with touch controls. Besides the already mentioned secondary fire controls, the game uses touch for picking up upgrades/intel, double tapping the back of the Vita will activate the run (down on the d-pad will also do the same) and opening doors. A note on opening doors, if you don’t wait for the touch prompt to appear before touching the screen, you may accidentally use your secondary fire, which could kill you if the weapon uses explosives. Live and learn, I say. Throughout the game you’ll find upgrades to your weapons called “Grey Tech.” Weapons only allow for two upgrade slots to be active at one time, so you must choose wisely when upgrading. Pressing the SELECT button will bring up an absolutely awkward upgrade menu. You need to touch a cube in the middle of the screen and rotate it till you find what you want to upgrade. This is a perfect example of where the use of touch controls is completely unnecessary.

Resistance: Burning Skies‘ graphics are a step in the right direction for the Vita. The textures are clean and high-res, but some texture loading and occasional pop in does occur.  In game cut scenes are crisp and characters lips move while talking, however while playing the game, characters lips will not move. The biggest issue I have with the graphics, are the graphic book style videos. They look severely pixelated and compressed.  It almost looks like they stretched the video to take up the whole screen. There is no excuse for how bad they look. As for the other graphics in the game, enemies have death animations instead of rag doll physics, but the animations are varied and the occasional exploding chimera always looks nice. Any non exploding chimera’s body will disappear after a few seconds. The graphics on the weapons look detailed and each have their own look, so you’ll never be left wondering which weapon your using.

The game’s sound quality is a mixed bag. A majority of the game is spent walking around with no background music, but when the music is heard, it is usually beautiful sounding instrumental pieces. I understand not wanting to have music playing constantly, but when all you’re doing is walking around a level, there should be something more besides your footsteps. Weapon sounds are varied enough, so like the graphics you won’t be confused on which weapon you have. I do think a little more “thump” could of been added to them though. 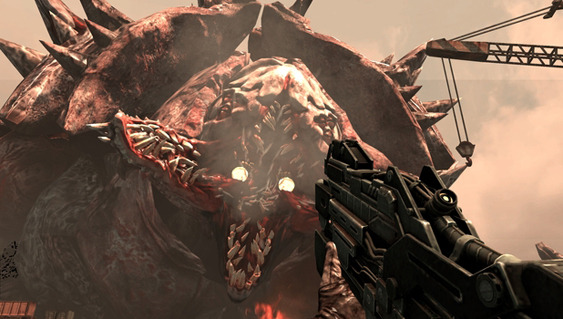 A quick sprint into multiplayer showed me that a good time can be had with it. The game features up to eight players online in your standard deathmatch, team deathmatch and survival mode. Survival mode has six humans fighting again two chimera.  If a human gets killed by one of the chimera, they move over to the opposing team. The last person standing wins the match. I experienced a few disconnects getting into matches, but once I was in, I had a great time. I think most people will find at least something to like about the online portion of the game.

Conclusion time! Look past Resistance: Burning Skies flaws and you’ll find a fun FPS experience on a handheld. The story and length of the game might be a little lacking, but the solid game play and multiplayer more than make up for it.  I can say one thing for sure, Resistance: Burning Skies has me excited for the future of the Vita.  Let’s hope Sony thinks the same thing.

Story – 2/5 – A run of the mill basic story, which goes no where and unfortunately ends with a whimper and not a bang.

Gameplay – 4/5 – A short but fun time.  Kicking alien ass is a blast. The added multiplayer increases the value you get out of the game.

Graphics – 3.5/5 – Texture loading and pop in hurt the game, but the real criminal is the horrible graphic book style videos.

Sound – 3.5/5 – The lack of background music and a lack of loudness on the weapons really hurts the overall sound design, but when things do come together and the music can be heard it’s pleasing to the ears.

Overall (not an average) – 3.5/5 – The road might be bumpy for the Vita, but Resistance: Burning Skies proves that a future can be had for the handheld. Just maybe a little more polish next time.