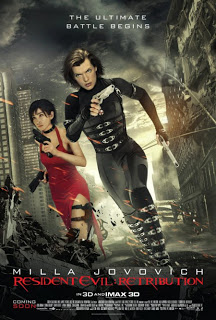 Resident Evil: Retribution, is certainly a flashy movie, with lots of explosions, bullets flying everywhere and monsters aplenty, but for the most part, it’s style over substance. The story is riddled with plot holes, the acting seems to have been left out to make room for more boom boom. However, by now you should be expecting that when walking into a Resident Evil movie, so you’ll be happy to know Retribution ranks as one of the better sequels, but when we’re talking about the fifth movie in a line of films that really keep progressively getting crazier and crazier, that doesn’t mean a whole helluva lot.

Short nitty-gritty plot description from IMDb is as follows: Alice fights alongside a resistance movement in the continuing battle against the Umbrella Corporation and the undead. 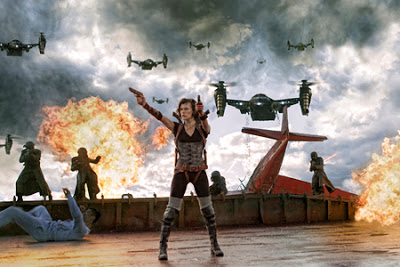 The biggest compliment I can give to Resident Evil: Retribution, is that it’s as close to a video game as possible. The story progressives through levels, each with their own theme and bad guys. It’s an interesting idea and for the most part it works, although it all falls apart once the movies reveals that there was a convenient shortcut that the “good guys” could’ve took, which would’ve nulled a giant portion of the film. Still, there are several scenes I enjoyed, such as the Russian zombies, with their machine guns and motorcycles, or the beginning zombie invasion of a suburbia Racoon City, which looked a lot like the beginning of Dawn of the Dead (2004). I wish we could’ve got more of those two scenes, but sadly, the story needed to get to certain point fast and fast it does. It skips around from one scene to the next, with characters from past films being introduced (an obvious ploy to bring in the fans of the first movie) and quickly put aside (what the hell happened to Chris and Claire Redfield?). We also get several new characters from the game, such as Barry Burton, played by Kevin Durand. He’s completely underused, except for one cool scene, which I won’t spoil. Fans will also be excited to see Ada Wong (Bingbing Li) showing up, along side Leon Kennedy, played by Johann Urb, who looks a lot like a young Dolph Lundgren. They have a little more to do than Barry does, but still fall along side Barry in being underused. However, with all these characters, I’d still be hard pressed to mention anyone that was actually good at acting, save for returning Milla Jovovich, as Alice. My opinion for worst can easily bounce back and forth between everyone, with Sienna Guillory as Jill Valentine and Shawn Roberts as Albert Wesker receiving top choice. 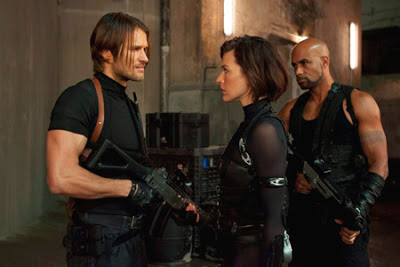 Besides the aforementioned terrible acting, missing characters and schizophrenic plotting, Resident Evil: Retribution still is a fun movie. It’s balls to the wall action and I don’t think you’ll ever find yourself growing bored. For the 96 minute runtime, I would say 95 1/2 of those minutes feature some sort of fight sequence. Plus, the film looks absolutely gorgeous, from the intro that plays in reverse, the stark white hallways of the Umbrella corporation, all the way to the Moscow square setting, this movie doesn’t cheap out on the aesthetics. 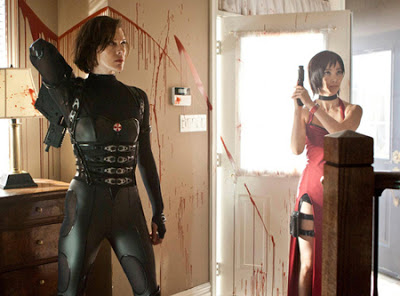 I always loved the music in the first Resident Evil, performed by Marilyn Manson. The music was quirky, fast paced and set the scenes perfectly. Well, I’m happy to report that the music in Resident Evil: Retribution, by tomandandy, ranks up as second best. Even though it might not beat the first, it certainly hits high on the list for heart pounding beats.

Resident Evil: Retribution is fun and that’s pretty much it. So, unless you were expecting some sort of miracle and thought this film was going to give birth to the messiah, you’ll come out liking at least something from it. To me, it doesn’t match up to the first one, but ranks second best, which is all we can ask for. I say, crack open some alcohol, invite a few buddies over and pop in this movie and have a good time.
Rating: 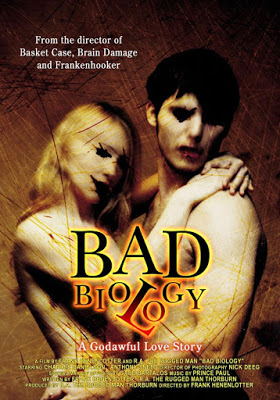 Bad Biology (Guest Post Movie Review)
wpDiscuz
We use cookies to ensure that we give you the best experience on our website. If you continue to use this site we will assume that you are happy with it.Ok