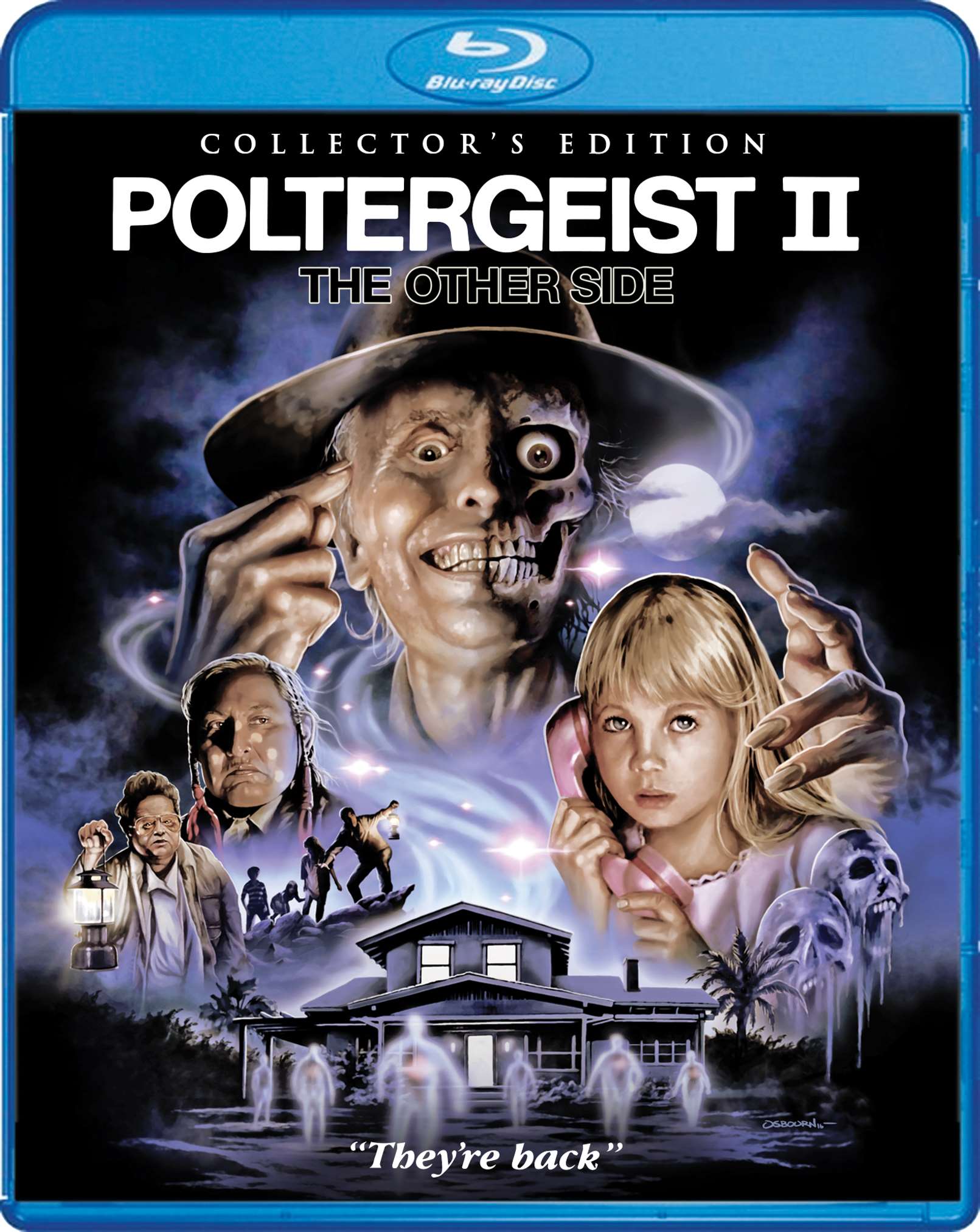 Poltergeist II: The Other Side – Review (Scream Factory Blu-ray)

It took four years to come out with a sequel to the original Poltergeist. In those four years, they had plenty of time to come up with some ideas and the end result of Director Brian Gibson’s (taking over directorial duties from Tobe Hooper) Poltergeist II: The Other Side is a mashup of rehashed ideas and some truly creepy scenes, thanks in part to Julian Beck’s portrayal of Reverend Kane and H.R. Giger’s conceptual ideas for the ghosts/demons. It might not be as great as the first flick, but the film is fun enough to check out, and what better way to check it out then with Scream Factory’s Collector’s Edition Blu-ray release. Should you fork the money over, though? Read on to find out… 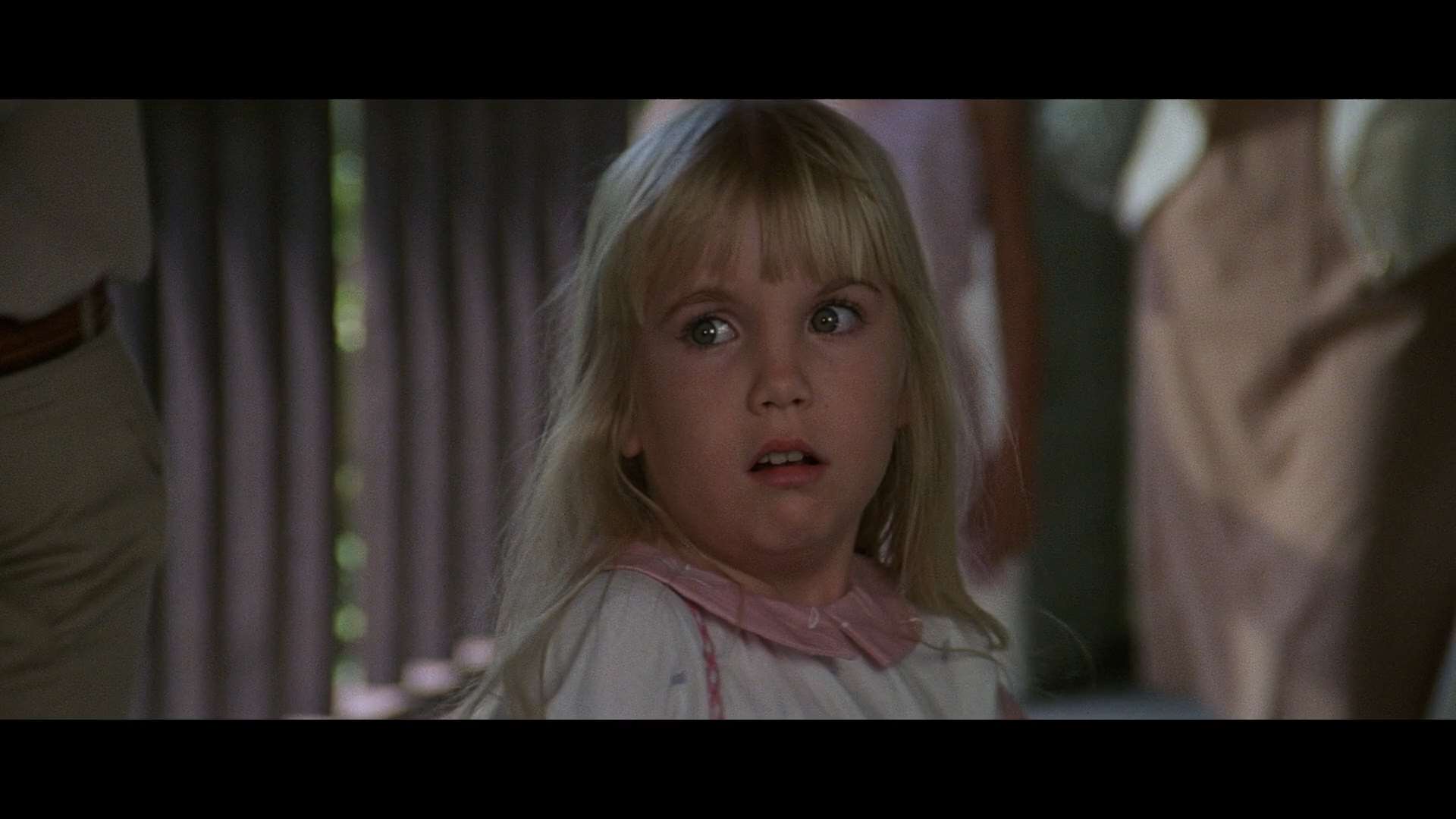 In this thrilling follow-up to the smash hit Poltergeist, the Freeling family (JoBeth Williams, Craig T. Nelson, Heather O’Rourke, Oliver Robins) settles into a new home following the annihilation of their former residence by terrifying visitors from the netherworld. But the spirits of the dead are still hell-bent on luring the family’s clairvoyant daughter Carol Anne to “the other side.” This chilling sequel, directed by Brian Gibson (Breaking Glass) also stars Will Sampson (One Flew Over the Cuckoo’s Nest), Julian Beck (The Cotton Club) and Zelda Rubinstein (Anguish) returns as Tangina.

Picking up in movie universe time a year later, the Freeling family (minus their older daughter) have moved in with Diane’s Grandmother, hoping to start life over again. Evil never rests, though, and the spirits find their way to the family in the form of the evil Reverend Kane, a spiritual cult leader who tricked his congregation into believing the end was near and convinced them to lock themselves up underground, in the exact spot where the pool was located in the original film.

Reverend Kane took notice of Carol Anne, thanks to her journey into the “other side” in the original movie, and he feels she is the key to gaining the power and strength to feast on souls and break over to the living side of things. On the living side, he is only able to take the form of the Reverend Kane, which in and of itself is creepy as hell, thanks to Julian Beck’s riveting performance. On the “other side,” though, the demon can be seen in his full form as something straight out of Giger’s head (which it actually was!)

Poltergeist II: The Other Side tries to introduce some new ideas, with the inclusion of the Native American character Taylor (Will Sampson), who is working with returning character Tangina Barrons (Zelda Rubinstein). He has dealt with this before and he knows exactly what needs to be done to defeat the demon, which oddly enough, requires a process of two grown men sitting half naked in a sweat lodge.

The sequel also focuses more on the practical effects this time around, with some truly memorable moments. The puking scene involving Craig T. Nelson is fantastic in regards to the effects and the resulting creature that pops out, who will probably stay in your dreams for a few weeks. 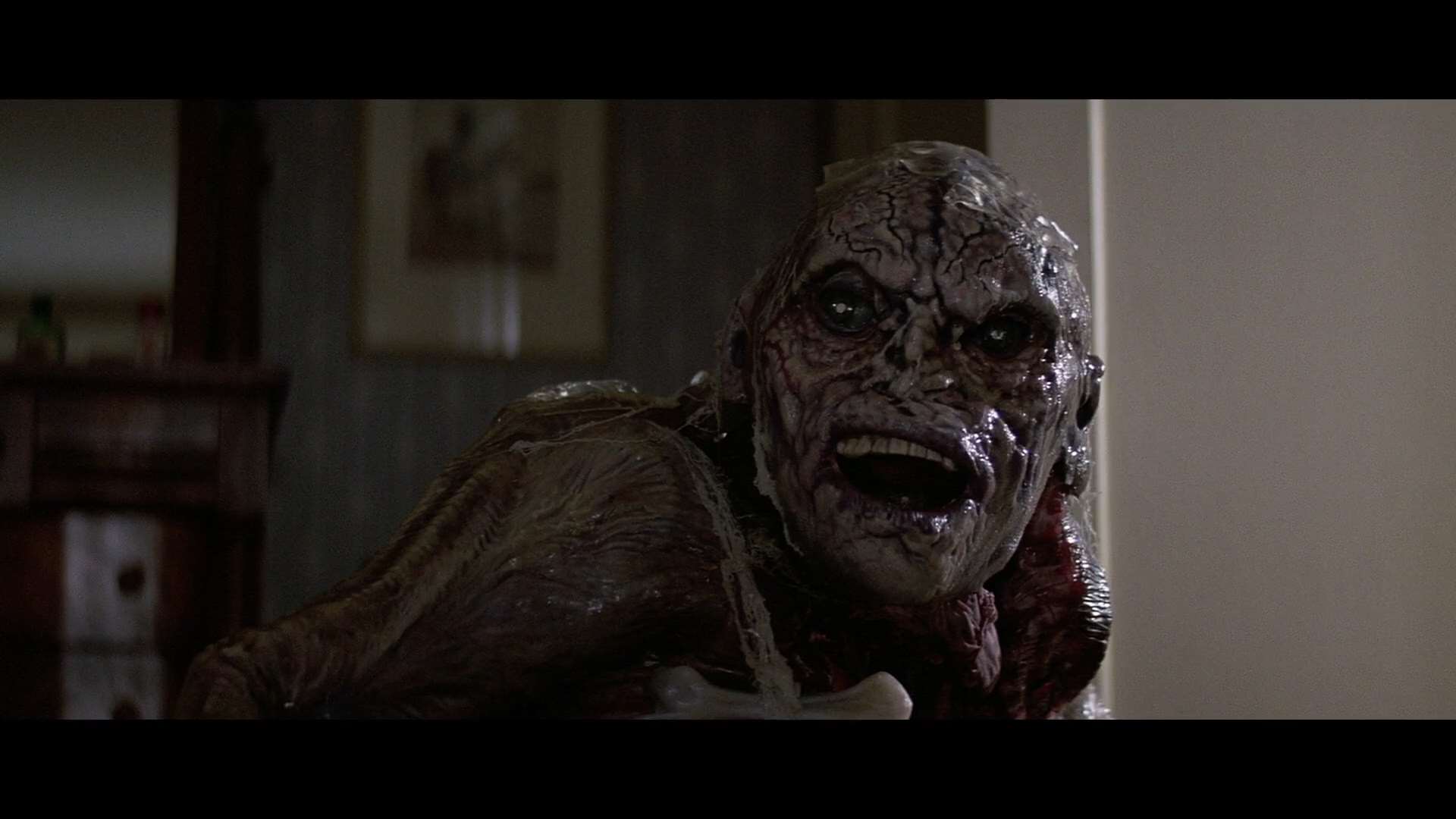 Nevertheless, the film just couldn’t help rehash the general story structure of the original movie, which is probably why the film didn’t strike gold when it came out in 1986. Sometimes sticking with the familiar works, but in regards to Poltergeist II, it’s the new stuff that worked and more of that would have helped the film overall.

Scream Factory releases Poltergeist II: The Other Side on a single disc Collector’s Edition, with all new artwork and a bunch of new special features. The video transfer is truly fantastic. The scene of Reverend Kane speaking through a screen door looks so damn good, you can count the individual holes on the screen. As for the sound, you can choose between DTS-HD Master Audio 5.1 and 2.0. I watched the film in 5.1 and besides a lack of utilising the rear channels, the track was loud and clear. 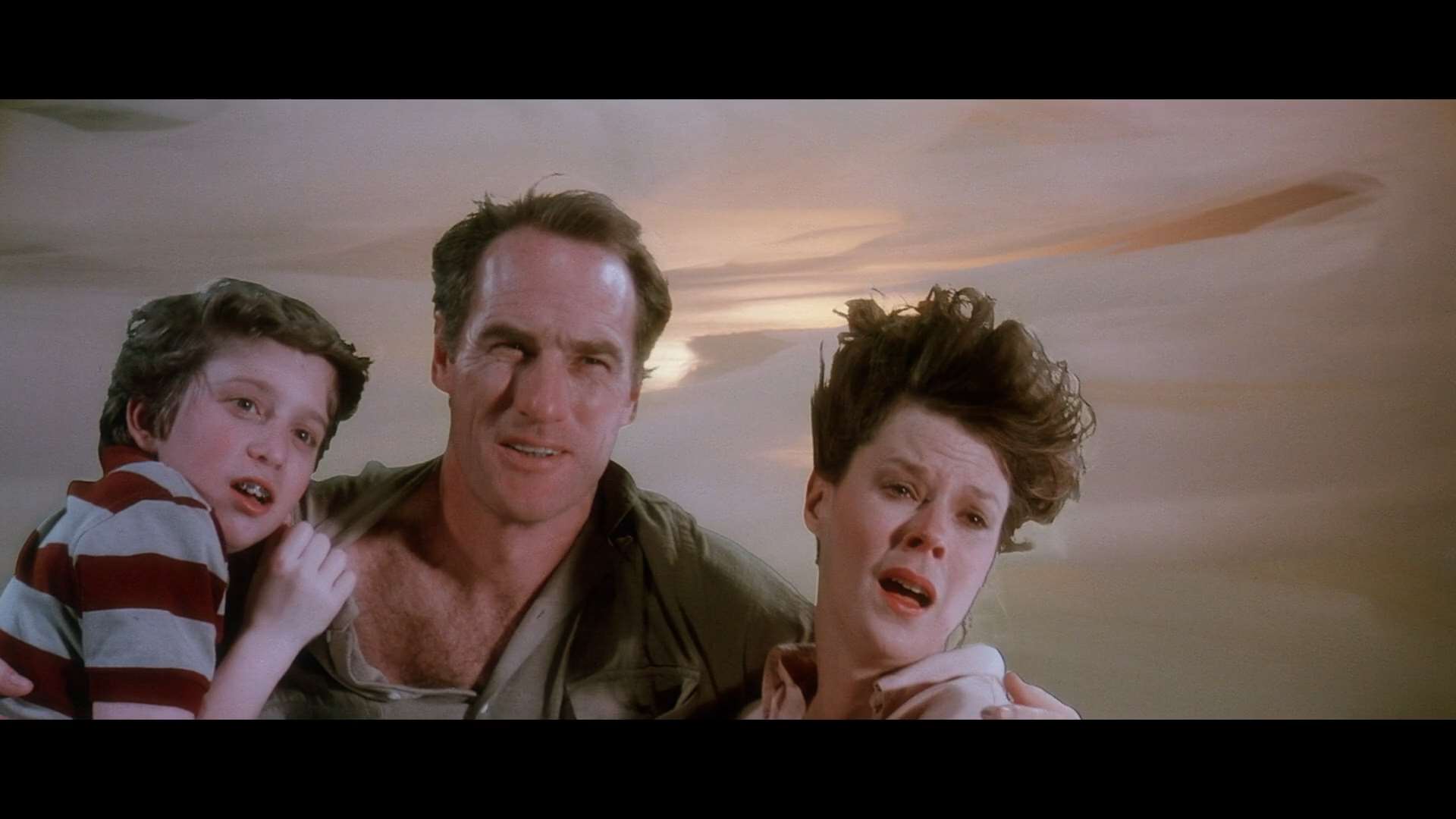 Special Features focus mainly on the special effects side of things, with numerous interviews with the special effects crew. The highlight in the special features was the look at H.R. Giger’s work on the film. You also have an interview with Oliver Robins, who played Robbie. Basically, he was grateful for the film as it got him out of being bullied at school. Rounding it all out are couple older featurettes, trailers and a couple of new audio commentaries. Sadly, no new interviews with Craig T. Nelson or JoBeth Williams.

Poltergeist II: The Other Side takes some hits for rehashing the story structure of the first one, but it also should be praised for introducing us to the terrifying Reverend Kane. Plus, the special effects are fantastic. Things do get a bit cheesy at times (I’m looking at you ending), but overall the film is worth owning, thanks to Scream Factory’s wonderful Blu-ray. 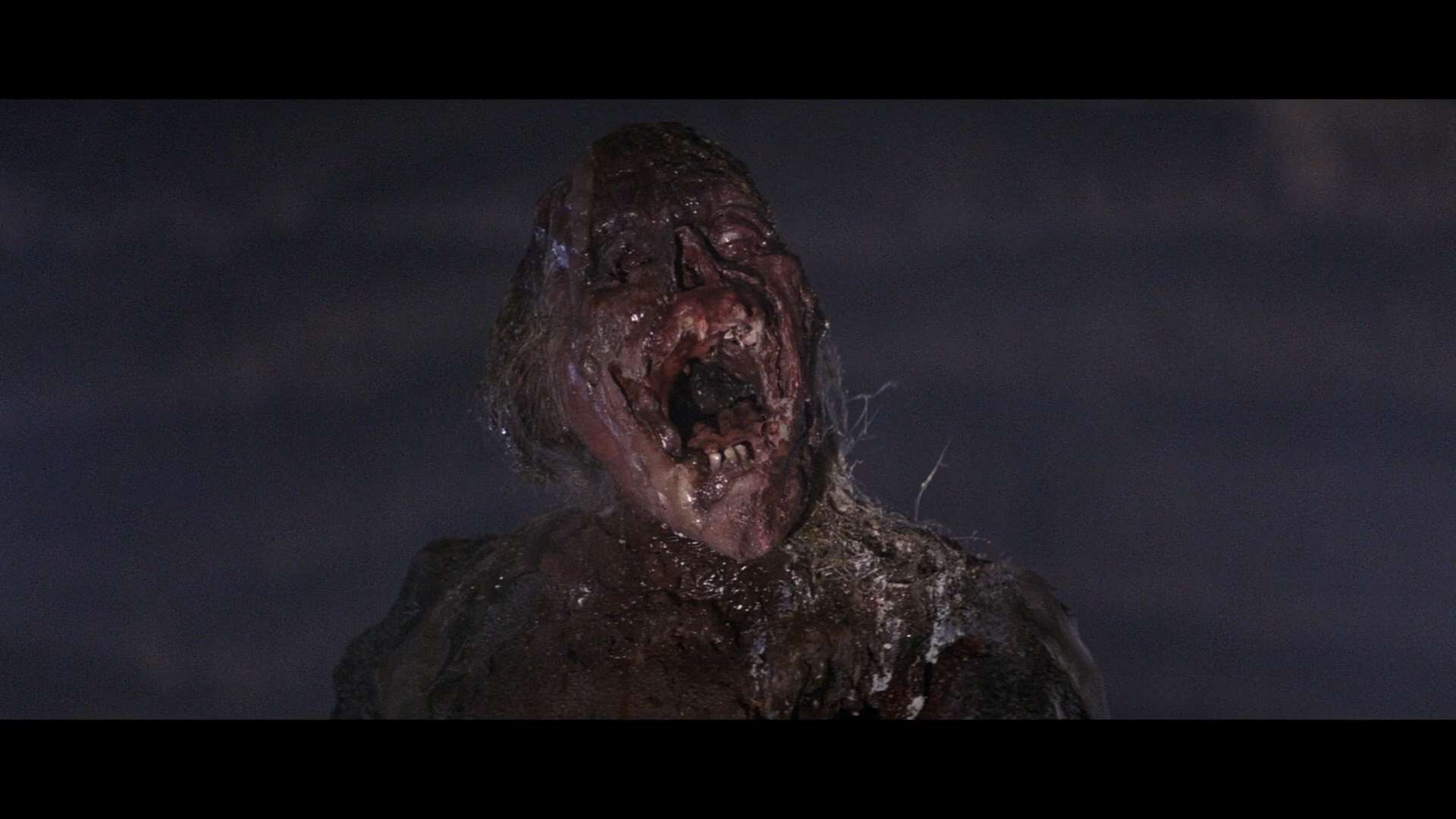 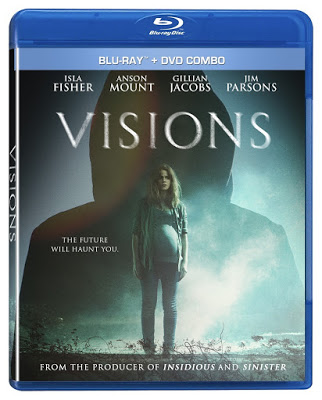 Visions (Blu-ray / Movie Review)
wpDiscuz
0
0
Would love your thoughts, please comment.x
()
x
| Reply
We use cookies to ensure that we give you the best experience on our website. If you continue to use this site we will assume that you are happy with it.Ok