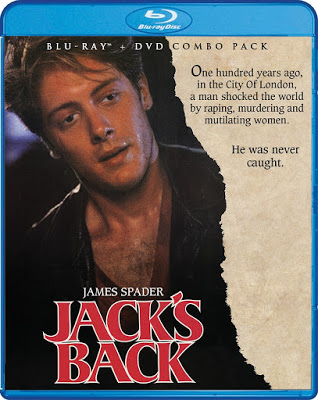 When Scream Factory announced they were releasing Jack’s Back on Blu-ray, I never even heard of the flick before. After reading up on it and finding out it starred James Spader and had to do with a modern-day Jack the Ripper, my interests in checking it out went through the roof. After finally getting my hands on it and sitting down to watch it, I came out liking it quite a bit, but was surprised to find out that the Jack the Ripper material was actually just the catalyst for the actual story, which involves a man on the run from the law, while he tries to figure out who his brother’s murderer is. The movie does come back around to the Ripper subplot and it effectively keeps the murderer’s identity a secret for most of the movie, but I would be lying if I didn’t wish that it dealt more with the modern Jack the Ripper. Either way, the movie is still a fun 80s trip and I think you’ll agree once you read on… 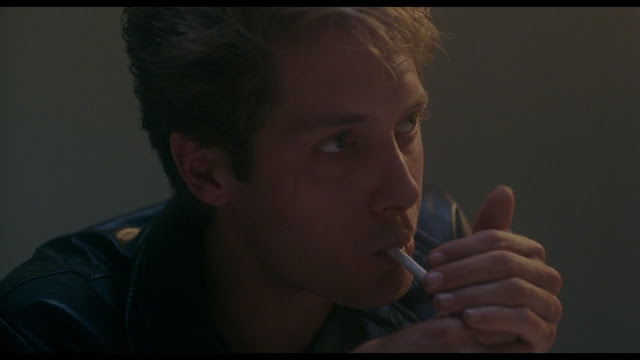 One hundred years ago, Jack the Ripper slashed his way through London’s red light district. Now, a modern-day maniac is honoring the event by mutilating L.A.’s ladies of the evening. Has Jack the Ripper been reborn? The police are stumped and the prostitutes of L.A. are scared. The only person with a chance of solving the murders has a problem of his own – he’s the LAPD’s number one suspect.

In order to not ruin the twists and turns of the movie, I can barely talk about the story. What I can tell you, is that the plot summary above kind of summarizes the flick, but the movie has less to do with the Ripper and more to do with James Spader trying to solve a murder, while dodging the police. If you’re expecting to go into a movie that’s all about a modern retelling of Jack the Ripper, you’re probably going to be disappointed.

Even though I wanted more Ripper, I was still very satisfied with the film I got. James Spader does a fantastic job in the role and Cynthia Gibb, who is very easy on the eyes, is just so damn likable, you can’t help but fall in love with her character. The movie also does an excellent job on keeping the identity of the Ripper a secret. I did figure out who the killer was before the end credits, but that doesn’t mean the movie didn’t have me second guessing my theory multiple times. I also want to mention that there was a part near the end where I thought the movie was going to end, not revealing who the killer really was, and I thought to myself, damn that’s brave of them, but alas, the movie kept on going. I would have loved to see the movie end there, but the more I think about it, the more I probably would have been frustrated not knowing who really did all these killings. Having said that, the movie still didn’t explain why the killer goes after another victim when his cycle of mimicking the Ripper was complete. I assume it was just thrown in to give the movie a longer runtime and an actual ending.

Jack’s Back was honestly just an all around fun time, and that’s truly the most you can ask for. The flick kept a tight pace, with a mystery that works (even if it’s pushed aside for a bit) and top it all off, the film had some funny bits.

The Blu-ray from Scream Factory is looking wonderfully grainy, much in thanks to the overuse of fog on the set. This is explained some in the 23:51 minute Making of, which features interviews with Director Rowdy Herrington, Producer Tim Moore, DP Shelly Johnson and Actress Cynthia Gibb, who is still looking damn fine. The video, grain and all, is serviceable and the movie probably has never looked or sounded better.

The features included are the aforementioned Making Of, a commentary from Writer/Director Rowdy Herrington and finally a trailer. I would have loved to see an interview with James Spader, but alas, he is too busy for such trivial films nowadays (I assume that’s why they couldn’t get him). The Making Of does provide a good amount of information into the story and work that went into getting the movie on the Big Screen. There wasn’t anything Earth-shattering mentioned, but what was was informative.

Jack’s Back slightly disappointed because it didn’t focus its attention on the Jack the Ripper plot, however, what we did get was welcome, much in thanks to a fantastic performance from James Spader. Also, the movie does keep the identity of the Jack the Ripper copycat a secret until the end and it will probably have you second guessing the killer much like it did for me. Overall, the movie and the Blu-ray is one purchase you can’t go wrong with. Plus, this is sexy James Spader we are talking about here; poofy hair, a leather jacket, an earring and a sensuous scar. I say Jackpot!

Red Dragon Book Review
wpDiscuz
We use cookies to ensure that we give you the best experience on our website. If you continue to use this site we will assume that you are happy with it.Ok