I have to say, for a movie that basically amounts to a made for TV horror film, House Hunting actually managed to surprise me, in that it had an interesting concept and the acting was above average. It’s not the best “stuck in purgatory” film of it’s kind, but it certainly isn’t the worst. Let’s read on to see what we got ourselves into…

Short nitty-gritty plot description from IMDb is as follows: Two families go to an open house and can’t leave. 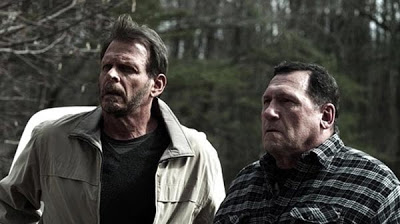 That IMDb summary above is by far the best summary I’ve ever read. It’s straight and to the point and pretty much sums up exactly what this movie is about: two families, who visit an open house and find out that no matter how many times they try to drive out, or walk out, the road can never be found.

House Hunting is not scary, not in the least bit and I really hope they weren’t trying for it to be scary either, as they would’ve failed. What I do hope they were trying, was to give me something at least a little bit interesting to digest, cause as for that, they succeeded. The movie kept me interested through it’s actually surprisingly long 102 min run time and had enough questions to keep me guessing to the very end. Speaking of the end, I would say it’s my biggest gripe. The movie made it seem like the two families were connected to what is happening at the house, yet when that ending roles around, it throws that out the window and gives us some ‘meh’ twist.

House Hunting isn’t going to win any awards, neither in acting (which is okay, but at times cringe worthy) or scares, but at least the story rolls along and doesn’t play too dumb with the audience. I surprisingly recommend checking out House Hunting, if you’re in the mood for a ghost/never ending nightmare type of movie. It can be found on Netflix.

P.S. If you happen to like this movie, I highly recommend checking out Dead End. I haven’t reviewed it on this site, but it’s definitely one that I really enjoyed and think you would too.

A spy, snake and ghost filled day.
wpDiscuz
We use cookies to ensure that we give you the best experience on our website. If you continue to use this site we will assume that you are happy with it.Ok