Douglas Schulze’s Hellmaster (also known as Them) is a fucking mind-trip of a movie. That doesn’t necessarily equate to a good thing, though. It’s an insane journey that tackles themes about homelessness, psychic abilities, religion, and teen angst, all the while never really pinpointing a valid position on any of them. Taking cues from slasher films, gialli, Mario Bava, and Dario Argento, this film about kids studying at the Kant Institute for gifted students who are attacked by drug-mutated slaves and their divinity-aspiring master (John Saxon) is all over the place, and in many ways that makes it a horribly bad time; and yet the gleeful wretchedness of the whole thing still conjures a sliver of fun thanks to Saxon’s half-assed deliveries, absolutely dreadful acting, and some really good cinematography from Michael Choi (who has gone on to do some great projects).

Saxon himself is rarely featured here, and probably a good thing too – he seems wholly disinterested in his role, never flashing the usual charm that Saxonites know and love. Instead, he wears a set of awful teeth and conducts his band of merry misfits – students who, 20 years prior, he experimented on with some weird drug that, when diluted with blood, turns them into mutated mind-control slaves – to raze the Kant Institute to the ground. All of this occurs while Hellmaster follows a group of teens – including Shelly (Amy Raasch) who has some mind-reading powers – around a really confusingly-laid out school while they argue about sex and… one guy carries a whip around with him? What is going on!

Ultimately Schulze’s writing leaves a lot to be desired. The script starts all kinds of ideas and then never goes anywhere with them, also really muddling the whole backstory of Saxon’s Professor Jones in the process. If you’re trying to sort the puzzle pieces throughout the film in the hopes that Hellmaster will finally pull it all together, you’re going to be sorely disappointed. It’s a shame, too, because Schulze has some interesting ideas floating around about the homeless epidemic and the problem with organized religion; it’s just that the ending amounts to a whole lot of nonsense.

The redeeming qualities of Hellmaster come from its mutated monsters, which actually have some good makeup and costume design. Also of note is Choi’s lighting choices, which certainly seem borrowed from Suspiria and Tenebrae with lots of reds and greens. And truthfully, some of the film is so hard to follow it’s hilarious; you’ll have storyline whiplash when Hellmaster is done with you.

Most probably passed this by in 1992 when Hellmaster released, but if you haven’t seen it, it’s worth one watch to experience such a haphazard creation. More than that, though, and you’re most likely just flagellating yourself.

Vinegar Syndrome has provided a new Blu-ray release of Hellmaster with a new 4k scan of the film’s original camera negative. The movie looks quite good despite its low budget, and Vinegar Syndrome has done a great job with this transfer. No damage to report here, and detail and clarity is very strong. Grain is kept to a medium body and skin tones, blacks, and color timing are all well-maintained. The reds and greens certainly do pop in this release. Those who have caught crappy VHS versions of this film should be impressed. 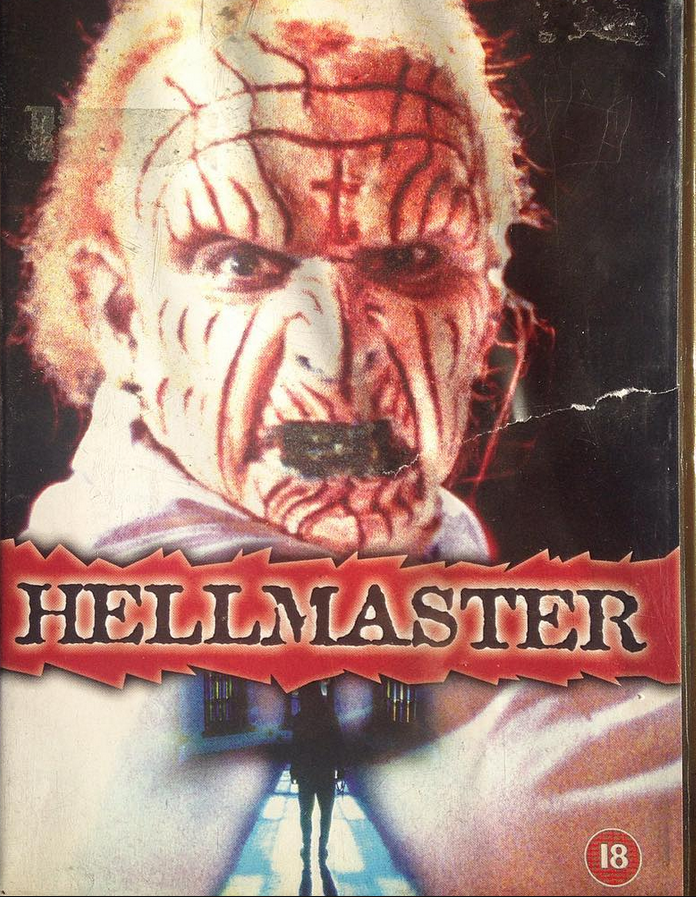 CHECK OUT
NSFW gallery of screenshots from this Blu-ray.

Audio is a DTS-HD Master Audio stereo track that does have some issues, namely a sibilance problem that is pretty consistent throughout the movie. Also of note are some moments of reduced sound quality or muffling, although I’m fairly certain these stem from poor audio recording in the source itself. None of these issues are very serious, and the sibilance isn’t so prevalent that it becomes grating. English subtitles are also included.

Extra features aren’t extensive but there is a great interview with Michael Goi who talks about his influences with the lighting and even gives a great shout-out to Vinegar Syndrome and other boutique Blu-ray labels preserving old cult films. Also included is a new audio commentary with director Douglas Schulze. A director’s re-cut of the film, in SD footage, is also provided along with a previously existing commentary from Schulze. Also included are conceptual and behind-the-scenes galleries, as well as a bleary location featurette. Reversible cover art is also in the package along with an extra DVD version.

Hellmaster is far from a great film, but it is about 90 minutes of head-scratching fun for those willing to follow its odd story beats. Vinegar Syndrome has given this a nice Blu-ray release with an excellent transfer and a number of extras, including an additional cut of the film.