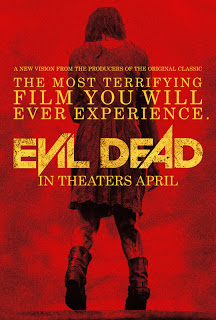 After being away for a while and taking my sweet time to get back into the swing of things, I managed to get my ass on over to the movie theater last night and watched Evil Dead. I’m assuming by now that everyone knows what this movie is all about, a re-imaging/sequel to the original The Evil Dead and to some extent, Evil Dead 2. However, that still doesn’t give you the answer as to whether it’s as hail worthy as the original, or merely pillow talk. So, in order to find out, you should get an axe and read on…

Short nitty-gritty plot description from IMDb is as follows: Five friends head to a remote cabin, where the discovery of a Book of the Dead leads them to unwittingly summon up demons living in the nearby woods. The evil presence possesses them until only one is left to fight for survival.

I don’t want to dive too much into the story, as I think it’s best to leave this one up for you find out what happens, but fair warning, there are a few spoilers ahead. The general gist of the story is about a group of friends (David, Eric, Olivia and Natalie), who are getting together to help out David’s sister, Mia, kick her drug habit. They get together at the old family cabin (which looks a helluva lot like the original cabin, with a 1973 Oldsmobile and all) and notice that it’s been broken into. They do some investigating work and find signs of witchcraft in the basement (explained in a somewhat pointless prologue, of which I won’t get into here). Of the artifacts in the basement, which consist of several dead cats (why I don’t know), they find the Necronomicon, The Book of the Dead. Heeding all warnings scrawled across the pages, Eric, immediately dives into reading the book and speaks the deadly demonic incantations aloud (not the wisest idea, but we wouldn’t have a movie otherwise). This releases the demons in the woods (called Deadites in the original films, but never in this one), which possess Mia through a not so sexy tree related homage to The Evil Dead. 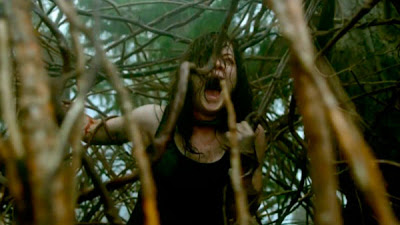 Mia heads back to the cabin, her friends unaware that a demon is inside her and think her crazy story is just a hallucination, related to her withdrawal. It isn’t long before they realize otherwise, as the shit hits the fan, along with several gallons of blood. Friends start getting possessed and the onslaught of homages start splashing across the screen, leading up to a somewhat disappointing ending (a somewhat weak monster design being the main culprit). 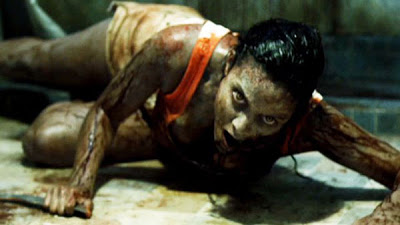 If you’ve seen the originals, you’ll have general idea of what will transpire, as the overall plot is similar, but thankfully different enough for this movie to feel like a sequel, that can exist in the same universe and not a shot for shot remake (think Zack Snyder’s Dawn of the Dead to Gus Van Sant’s Psycho). 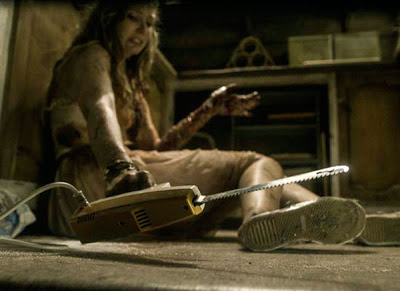 The movie isn’t shy with the gore, as we are treated to several gut wrenching scenes of dismemberment, with barely a shot of CGI being used. I know the director Fede Alvarez, said no CGI was used, but I have to disagree, as there are points where it seemed fairly obvious some computer trickery was at work (one certain arm dismemberment with a shotgun comes to mind). Still, given the unhealthy relationship modern horror films have with CGI, it’s nice to see a film like Evil Dead, that tries it’s hardest to go back to the good ol’ gory days of practical effects (long live Savini!).

So, the film has the gore going for it, but what about the acting. Things were off to a shaky start at first, with some wooden line delivery (“Oh my god, what happened to her eyes!?!”), but things settled down to a nice sweet spot later on in the film, when the dialog took a back seat to some crazy demonic antics. If you can get past the early stilted deliveries, you’ll be happy with the acting for the rest of the gory feature. (Also, quick shout out to one character who just couldn’t die. That person was put through the ringer!) 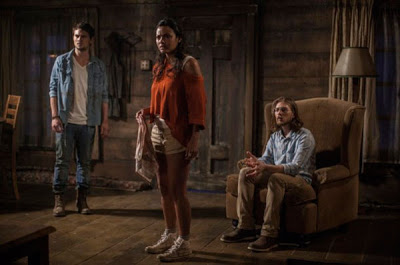 This review can’t be all positives though. Maybe it’s just me, but I feel like they might’ve went back to the good ol’ days of horror films a little too much, as some characters do some the dumbest shit possible. Like for example, if I locked a crazy demonically possessed woman in the basement, I sure as shit am not going to go down and check on her, when she whispers up from the dark, dank cellar, that she is fine now. No way in hell am I stepping foot on those rotten steps, which are for sure leading me down to a gruesome and painful death. Also, the abundant use of foul language felt a little too unnecessary, given the fact that the original films had no need for it. I understand the idea behind the use, but instead of making me feel scared, it only made me feel like I was seeing a sequel to The Exorcist (so much nasty stuff happens in hell). Speaking of scared, I’m not sure what movie the critics were watching, but this is by far the farthest from being the most terrifying experience I’ve had at a theater (unless you count the constant talking and laughter at inappropriate times). The film can make you feel uneasy at times, or maybe even a little jumpy, but I sure as shit wasn’t peeing my pants in fright.

There we have it, some negatives and some positives. Which outweigh the other? My readers know me by now and know I’m pretty easy going with a film. I rarely find a movie that is absolute trash and when I do, you’ll know it from the start of the review, that the movie is going to suck big time. So, as you’ve already guessed it, Evil Dead is definitely an overall positive experience (sans terrifying) at the movie theater. It’s a gory send up to the good ol’ days, giving groovy shout outs to the Evil Dead series and feeling like it could easily sit along side them. A few faults here and there, but never enough to make me not recommend this one. So, let’s give this movie some sugar baby and rate it.

(Note: Stay until the end of the credits for a quick scene. Don’t expect much though!)