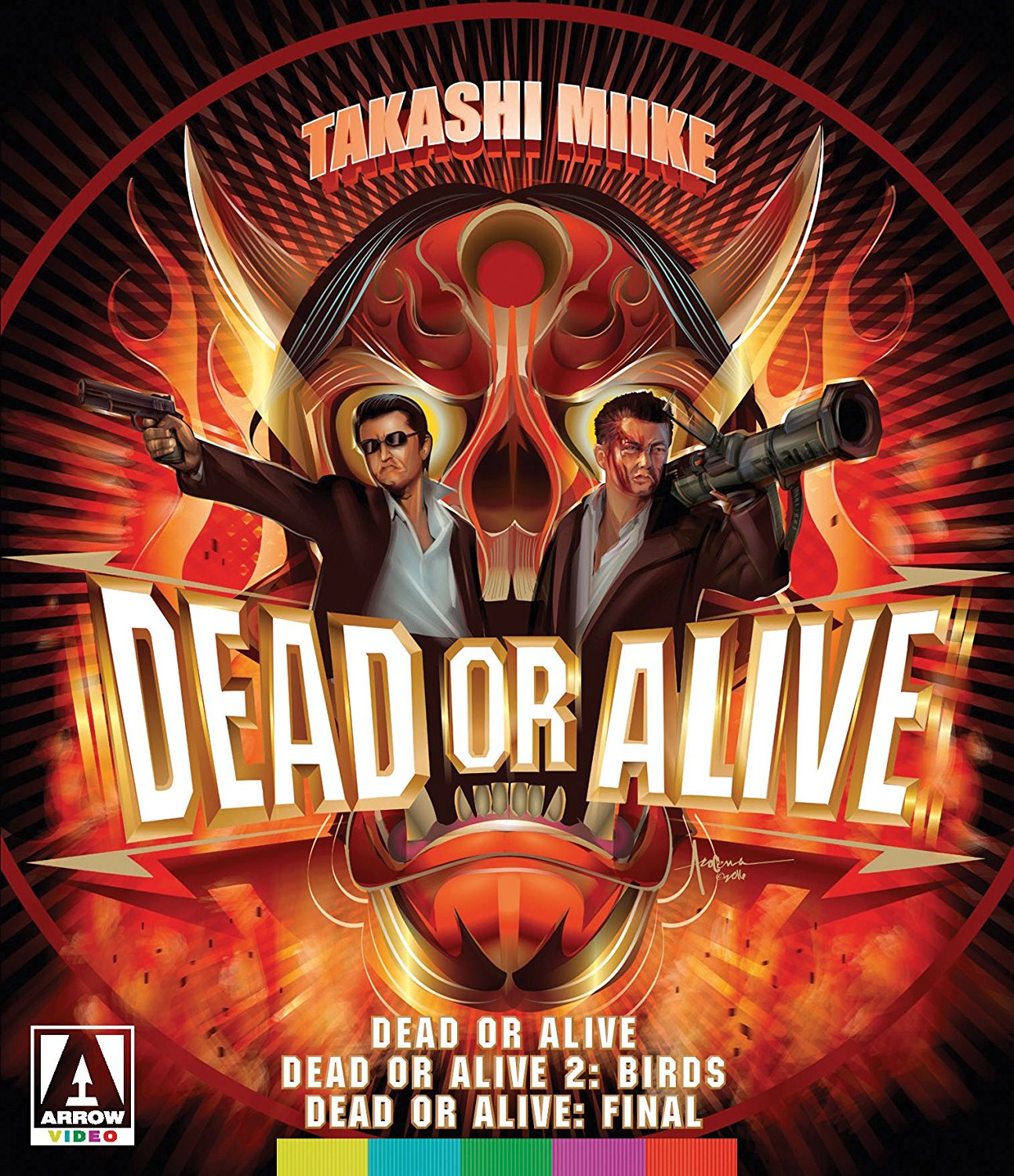 It’s not often that a trilogy of films of the same name will have nothing in common with each other, but leave it to Takashi Miike to do just that. The Dead Or Alive Trilogy has only one thing in common, and that is actors Show Aikawa and Riki Takeuchi, who star in each film but are always playing different characters. It’s a strange way of making a series of films, that’s for sure, but the real strange thing is watching the movies back to back and witnessing some of the strangest shit you’ll ever see gracing your TV screen. Giant flying Cock Monsters, shit baths, bestiality, cyborg ninjas, people turning into birds and a man dressed in a chicken suit getting riddled with bullets. Unfortunately, not all three movies are amazing, with arguably the first film being the best. The second film titled Dead Or Alive: Birds is a slower character piece and the last one appropriately titled Dead Or Alive: Final, is a nonsensical futuristic mess.

In Dead or Alive, tough gangster Ryuichi (Riki Takeuchi) and his ethnically Chinese gang make a play to take over the drug trade in Tokyo’s Shinjuku district by massacring the competition. But he meets his match in detective Jojima (Show Aikawa), who will do everything to stop them.

Dead or Alive 2: Birds casts Aikawa and Takeuchi together again, but as new characters, a pair of rival yakuza assassins who turn out to be childhood friends; after a botched hit, they flee together to the island where they grew up, and decide to devote their deadly skills to a more humanitarian cause.

And in Dead or Alive: Final, Takeuchi and Aikawa are catapulted into a future Yokohama ruled by multilingual gangs and cyborg soldiers, where they once again butt heads in the action-packed and cyberpunk-tinged finale to the trilogy.

As I’ve already mentioned, the first film Dead Or Alive is by far the best of the three. The opening minutes of the movie feature so much violence, drug use, sex and awesome music, your pulse will be pounding. What an amazing way to open a movie. It sets up all the characters and makes you damn excited for what is to follow. The rest of the film is just as good, as we watch Show Aikawa, who is playing a cop that is trying carefully to keep the peace between the Triads and Yakuza but is having a hard time, as newcomer Ryuichi(Riki Takeuchi) is going on a killing spree. The film is a violent, over the top action piece, with some real emotion behind certain scenes. It isn’t until the completely batshit ending do things take a turn for the absurd. I won’t ruin it for you, but your final opinion on the movie hinges on whether you can accept that the ending just happens the way happens because Takashi Miike is bat shit crazy.

The next film DOA: Birds, is more of a slow burn. Actor’s Show Aikawa and Riki Takeuchi return to play a couple of hitmen who were once childhood friends. After a hit, the two run off to their home and spend time catching up with the locals. Meanwhile, the Yakuza and Triads have it out with each other. Takashi Miike spends a lot of time building up the two hitmen’s characters and backstory, which after having come down from the high of the first movie, was a bit of an adjustment. Not entirely a bad thing, though, as the film does offer up some funny moments. Once again, however, the ending ends on a downright weird note. It’s as if Mikki has no idea how to finish a film properly. He is like the Stephen King of the film world. 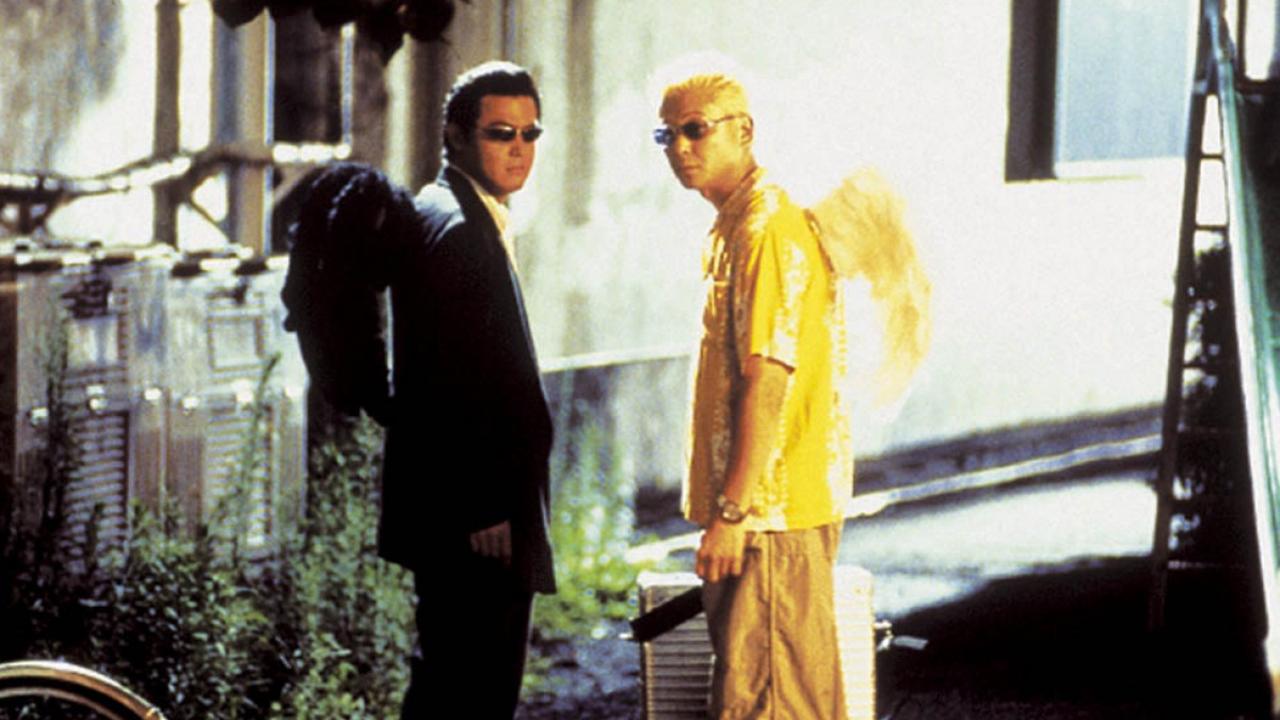 Finally, we have Dead Or Alive: Final, which jumps ahead several hundred years to the future. Show Aikawa and Riki Takeuchi both return, this time one playing a bad ass fighter who isn’t all he seems to be and the other is a…umm…trenchcoat flipping guy who walks around and scowls a lot. Honestly, I had no idea what exactly Takeuchi does in this movie. All I know is that the film takes a long time to do anything and when something does happen, it ends on an even weirder note compared to the last two. Honestly, you will not see this ending coming. Trust me on that.

The Dead Or Alive Trilogy shows signs of Takashi Miike brilliance, but it is some of his earliest work, which is both hit and miss. There are moments of brilliance (DOA‘s opening scene) and moments of absurdness (every single ending). Nevertheless, each film offers up something interesting, and you at least have to check out the first movie.

Arrow Video has released the trilogy in a two-disc set, with the first two movies appearing on disc 1 and the third on disc 2. All three films are as good as they are going to look. That is to say; they are rough around the edge video transfers that have been cleaned up as best as possible. The third film is the worst looking of the three, but Arrow provides an explanation at the beginning of the film as to why it does look the way it does. Short story: shot on video, only a crappy copy available.

The first disc houses a few special features for the first two movies, with a vintage making of for DOA: Birds and a commentary by Tom Mes on DOA. The rest of the features are trailers. It’s the second disc where the substantial features reside. You have some new interviews, features and even a few more trailers to check out. The new interviews are fairly lengthy (around 30 to 40 minutes), and they are informative. Oddly enough, though, is the lack of an interview with Takashi Miike.

Now, I know there is a lot of fans out there who love these three films, and I can certainly see why in some cases. I love the first movie and will watch that one again. As for the other two, I can wholeheartedly say I will probably never watch them again. Nonetheless, the Arrow Video Boxset takes all three films and tries to present them in the best possible way. Plus, you have some new features to check out, which fans will get a kick out of it. If you like the three movies, you won’t regret buying the set, but newcomers may want to investigate a bit further to see if they will like these films.

Bubba Ho-Tep – Review (Scream Factory Blu-ray)
wpDiscuz
0
0
Would love your thoughts, please comment.x
()
x
| Reply
We use cookies to ensure that we give you the best experience on our website. If you continue to use this site we will assume that you are happy with it.Ok