I learnt a lesson last night, I learnt that sometimes it’s best to keep a positive memory of a movie alive, by not watching it ever again. That’s what happened to me yesterday, when I decided to give the movie Darkness Falls a watch, thanks to my showcase of the The Tooth Fairy action figure. The last time I saw Darkness Falls, was at the movie theater in 2003. I remember enjoying it and thinking it was a lot of fun. Last night on the other hand, was not the same experience, not at all…

Short nitty-gritty plot description from IMDb is as follows: A vengeful spirit has taken the form of the Tooth Fairy to exact vengeance on the town that lynched her 150 years earlier. Her only opposition is the only child, now grown up, who has survived her before. 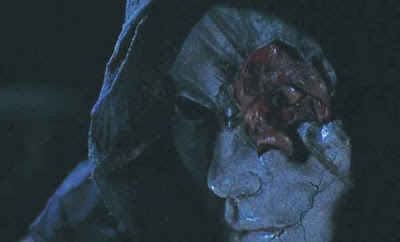 We begin the movie with some back story on Matilda Dixon, local old woman of the town of Darkness Falls. All the children go to Matilda and give her their teeth in exchange for money (sounds suspiciously like a poorly run black market harvesting ring). Due to a fire, Matilda gets burnt horribly and can no longer be in the daylight. So, she dons a porcelain mask and only goes out at night. After two children go missing, the town jumps to extreme conclusions and hangs Matilda. During her dying breath, she puts a curse on the town and people. DUN DUN DUNNNNNN!!

We jump ahead to the only scary part of the movie, the beginning 10 minutes, where a young Kyle has just lost his last tooth. According to the urban legend of the town, old toasty Matilda, or The Tooth Fairy, will come on the night of your last baby tooth falling out and if you happen to peek at her, she’ll do something… kill you? Take you away? I don’t know… something. Anyway, shit hits the fan fairly quick, when Kyle ignores all logic and decides to check her out and becomes the target of The Tooth Fairy. DUN DUN DUNNNNNNNN! 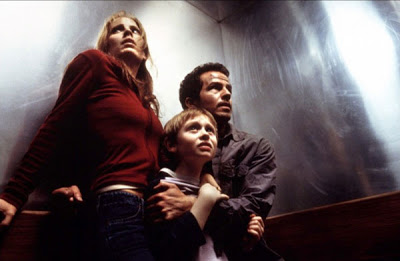 We now jump ahead again by 12 years and Kyle has gone from being a young boy of maybe 12 to an old man of maybe 34, who looks suspiciously like a Non-Canadian version of Ryan Reynolds. Kyle is still being haunted by Toothy and has to stay in the light at all times. Cut to an old friend of Kyle’s, Caitlin, who’s younger brother is just lost his last tooth and did the exact same stupid thing Kyle did (when they tell you to not peek, don’t freaking peek!). So, Caitlin ask for Kyle’s help and because she happens to look like the attractive Emma Caulfield, Kyle hightails it to Darkness Falls and face to ugly face with The Tooth Fairy! DUN DUN DUNNNNNN! 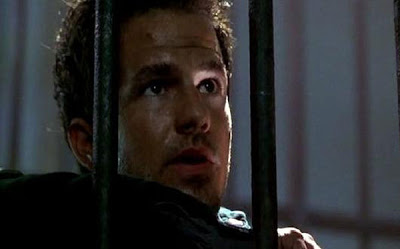 This movie has got a lot of problems going for it and a good plot ain’t one. The movie constantly forgets it’s own rules in favor of cheap scares. People have to look at her in order to be attacked by her, yet there are people who get killed that never once laid eyes on her. That bothered me, along with some really dumb scenes, like for the example the police chief, whose 6 six shooter gun fires 17 bullets at The Tooth Fairy, in a pointless and non scary scene at the police station, where all the cops are firing their magical guns and missing her and hitting the lights instead. 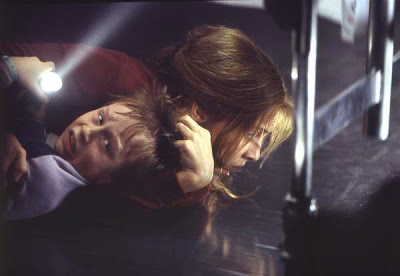 I really wish the original design of The Tooth Fairy was used in this movie. Having been designed by Steve Wang, The Toothy Fairy was going to be an Angel of Death and would’ve looked amazing. Unfortunately, the powers that be decided on script changes and wanted more and more scenes of the creature and brought in Stan Winston to design what we got. I hate to speak ill of the dead, but Stan really phoned it in on this one, as the design is so uninspired and bland. Plus, we see her way too many times throughout the very, very short run time (75 minutes, not counting the 11 minute credits). The scares are dwindled down to nothing after the umpteenth time we lay eyes on this lame attempt of a creature.

I noticed I’ve been really negative with this review and hardly listed any positives and that’s because there barely is any. I did enjoy the first bit of the movie and it had some nice tense scenes. Also, I was quite happy when the end credits came up. That was pretty sweet. 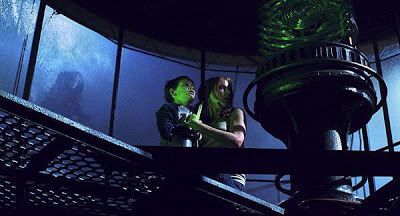 Well this just sucks. I really wish I would’ve left it alone and not watched the movie again. I enjoyed having that fond memory of liking it. Now, all I have is the desire to travel back in time 10 years and slap myself in the face at the moment I thought about buying the movie ticket. I don’t recommend seeing Darkness Falls again, if you haven’t seen it and if you did see it before and thought like I did about seeing it again, I think it would be best if you avoided traveling down memory lane and leave those teeth under the pillow. 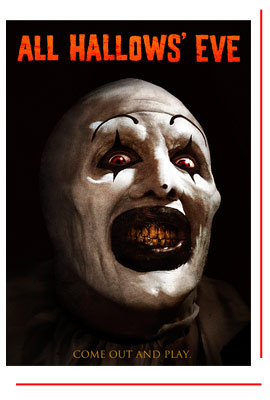 All Hallows’ Eve Movie Review
wpDiscuz
0
0
Would love your thoughts, please comment.x
()
x
| Reply
We use cookies to ensure that we give you the best experience on our website. If you continue to use this site we will assume that you are happy with it.Ok