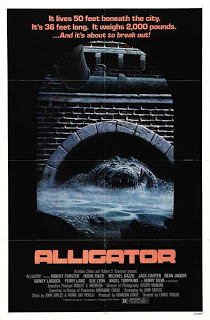 Watching Alligator reminded me of the time I watched C.H.U.D. I had a preconceived notion going in that the movie was going to be a giant cheese fest, loaded with ridiculous special effects and laughable acting. Colour me surprised and shocked, that Alligator shattered all those notions and gave me a stellar creature-feature, laudable acting and a dash of humor and gore thrown into the mix. So, lets flush any preconceived notions down the toilet and pop a squat on this review and read on…

Short nitty-gritty plot description from IMDb is as follows: A baby alligator is flushed down a Chicago toilet and survives by eating discarded lab rats, injected with growth hormones. The small animal grows gigantic, escapes the city sewers, and goes on a rampage. 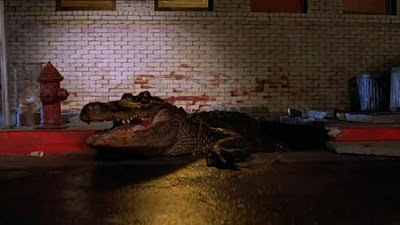 The movie uses the urban legend of alligators being flushed down the toilet, as the backbone of it’s story. In the late 60s, a little girl by the name of Marisa, buys a pet alligator and her father, while the girl is away, flushes him down the toilet. We cut ahead 12 years and discover that a pharmaceutical company is doing illegal experiments on dogs, pumping them full of drugs and growth hormones and when finished, dumping the dead carcasses into the sewers to hide the evidence (FYI, this movie isn’t for the dog lovers out there). It’s not too long before human remains start showing up in the drainage tanks of the sewers and the cops are called in. We get introduced to Detective David, played by the stoic Robert Forster. He gets roped up in the investigation and decides to check out the sewers, which brings him straight in line with the giant alligator. People at first don’t believe him, that is until evidence gets out that it really does exist and the alligator breaks free from the sewers and wrecks havoc on the city. Legendary hunter and suave sonofabitch, Slade, played by Dean Jagger, is called in to take care of the problem, a problem he doesn’t realize is 36 feet long and extremely hungry. With the help of a now older Marisa, David and Marisa devise a plan on how to stop this monstrous beast, but it may be too late, as the bodies start piling up. 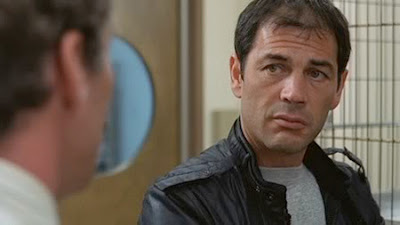 The number one movie to pop in your head when watching Alligator, is JAWS, in which Alligator has a lot in common with. The police officer facing off against the giant beast, while everyone else is fearing for there lives. The hunter brought in to take care of matters, but doesn’t realize exactly how big of a problem it really is. What Alligator does differently however, is inject a good amount of humour and gore, along with having it’s tongue firmly planted in it’s cheek. The movie takes no time in showing you the alligator and proving to everyone that it exists. The scenes down in the sewers create a nice claustrophobic tension, where you never know when the alligator is going to attack. (I think the thing that scared me the most about the sewers, was how all the people that went down in them, had no problem touching the dirty water and ground with their bare hands.) Once the alligator gets loose into the city, the tension starts to slip away a little bit, but never disappears completely. We get some great scenes involving the alligator chomping down on people, with one surprising scene involving a boy and a swimming pool (a scene which we would never see nowadays). Alligator certainly has it’s fare share of scenes that are both humorous and shocking.

I really enjoyed all the performances in the movie, yes even the nasal voiced chief, with a really bad hair cut. The main star (besides the animatronic gator), was Robert Forster. He was calm, cool and collective, even when face to face with the beast. The constant jabs at his receding hairline was pretty funny and the scene where he doesn’t give a damn whether a guy blows up the police station or not, was fantastic. He was like, “whatever, it just means I get a longer vacation.” I also have to give a shout out to Dean Jagger as Slade. The guys a bad ass, hitting on woman left and right and getting super excited about seeing a giant pile of gator shit. This character needed a spin off movie, where it’s just him hitting on woman, while shooting endangered species. The movie also stars cutie Robin Riker, as Marisa. She’s completely fine in the movie, but feels pushed into the background whenever Robert Forster is on screen. 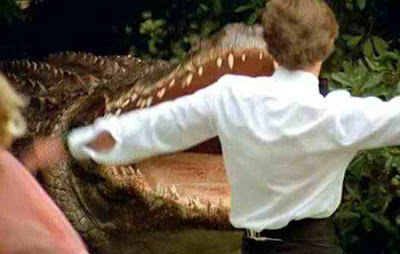 I hope my review of Alligator has convinced you to check it out. The movie definitely screams 80s cheese, but in actuality, it’s more than just that. It’s a semi-serious, yet funny take on the giant creature features, that were all the rage back then and doesn’t once stop being awesome. If you don’t believe me, maybe knowing that the one scene has the alligator crashing a wedding party in broad daylight, munching down on guests and whipping people with his giant tail, will convince you that this is one flick you shouldn’t flush down right away.